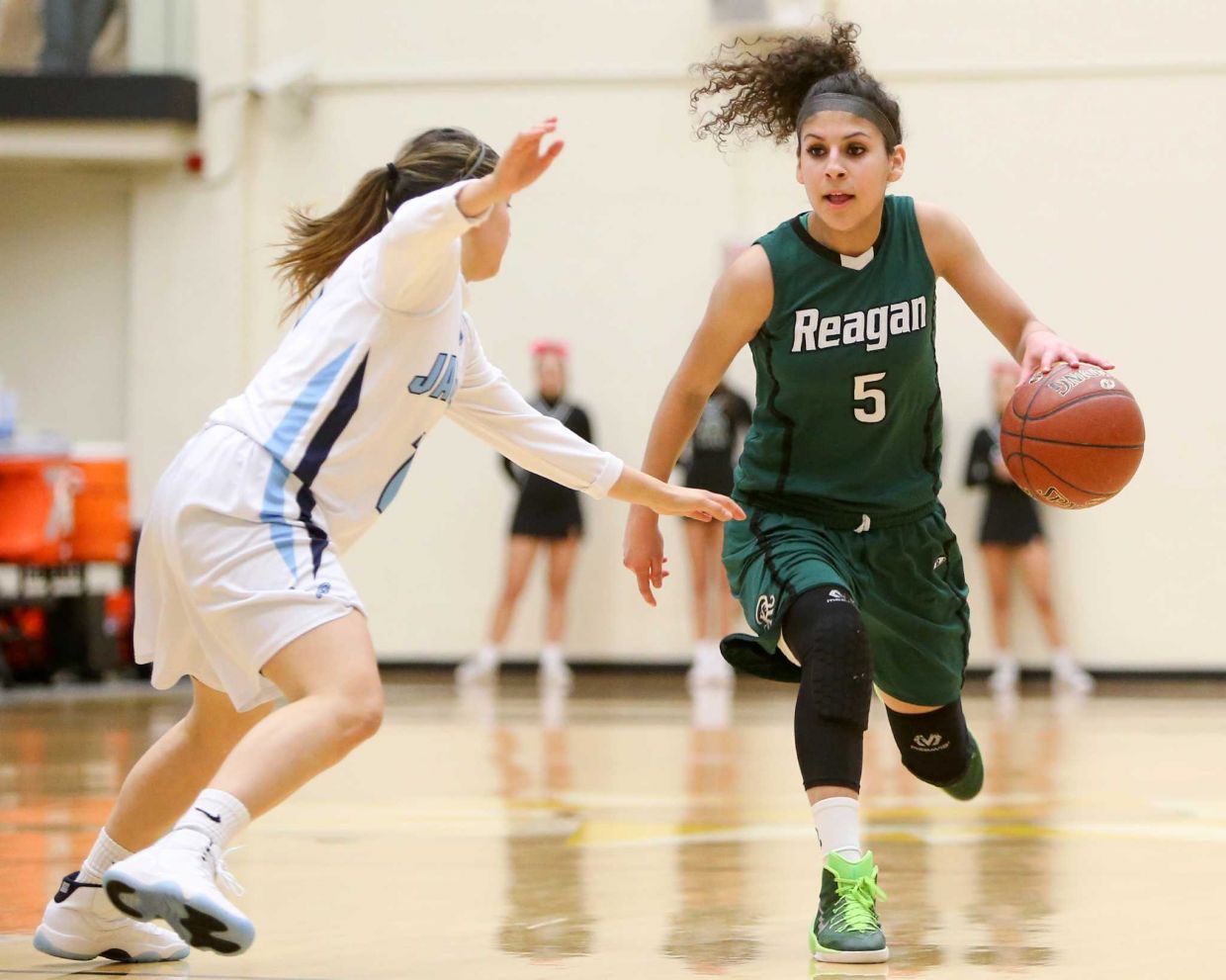 Emily Sandoval pulls up and swishes a sweet mid-range jumper. She gets back on defense and cuts off an attack at the baseline and forces a turnover that leads to a 3-point shot the other way.

Those are a couple of the reasons the junior guard has been a starter for Reagan the last two seasons. Watching her youngest daughter from the stands, Nancy Sandoval truly believes moments like that are victories. Nancy’s eyes well up when she thinks about them. But, like her daughter often does on the court, she holds back her tears. Her little girl is playing basketball — and everything is OK.

“I want her, more than I can tell you, I want her more than anything in this world to fulfill her dreams because she’s had to go through a lot,” Nancy said.

About 2½ years ago, Emily was diagnosed with rheumatoid arthritis, a chronic disorder that affects the small joints in one’s hands and feet. Inflammation from the lining of the joints can cause a painful swelling.

On the morning after Mother’s Day in 2012, Emily woke up crying. She was unable to close her hands. She tried to call her mother’s name from her bedroom, but Nancy couldn’t hear her. Emily got out of bed and ran to her mother’s room.

“Everything on my body hurt,” Emily said. “I was in — I don’t know, I can’t describe it — it was just aching pain everywhere. I was scared. I didn’t know what was happening to me. I was in so much pain, I couldn’t think of anything else.”

The pain was so severe that Emily couldn’t walk down the stairs. Emily climbed on her mother’s back, so they could get in their car and head straight to the emergency room.

“If I touched her, she screamed in pain,” Nancy said.

Before that, Emily noticed her hands were becoming discolored and they were cold to the touch. A pediatrician believed Emily had Raynaud’s disease, which causes some areas of the body to feel numb and cold.

The summer after finishing seventh grade, Emily noticed swelling in her knees. Nancy initially thought it was caused by from too much playing basketball and growing pains.

A few days after her emergency-room visit, Emily went to a rheumatologist in Austin. That’s when she was diagnosed with rheumatoid arthritis. The doctor prescribed a chemotherapy treatment to help fight it. Nancy balked at that initially.

“It was a lot of information thrown at us,” Nancy said. “We were just in shock. We were in denial and we didn’t want to start any of the medication because it was a chemotherapy drug. I said, ‘No way, we could put that in her body.’ ”

That Chicago visit was a trying time for Nancy and her husband, Larry. Just a few months earlier, they had watched their daughter playing basketball.

“We felt everything was over for her,” Nancy said. “If you looked at her at the time, she couldn’t move. She was in a wheelchair. We had to take taxis everywhere because she couldn’t walk. A month and a half into the diagnosis, and she wasn’t getting any better. She couldn’t dribble, she couldn’t hold the ball and she could stand very long without pain.”

There was one reassuring thing that came out of the visit with Klein-Gitelman when she told Emily that she has had many patients be able to return to athletics. That’s all Emily needed to hear.

“I thought about basketball the whole time,” Emily said. “As soon as I started feeling a tiny bit better, that’s when I went outside and starting shooting. My mind set was to make sure that I was on the team.”

Emily noticed immediate effects from the chemotherapy treatment. By August, she was able work out and play basketball. Emily would have likely made Reagan’s varsity team as a freshman, but not wanting to burden her too much, she played on the Rattlers’ freshman team.

“I watched her during middle school,” Reagan girls basketball coach Terry Barton said. “Before, she would have moved right on up as a ninth-grader. But, the first goal was to see what she could do.”

Emily was the team captain, and the Rattlers freshman team lost just one game that season. Outside of her coaches, family and close friends, not many knew what Emily had endured to get back on the court.

“She’s the strongest person I know,” said her close friend Sandy Ramirez, who plays for Antonian. “I know she doesn’t like to talk about how she feels, but I know she deals with a lot of pain. I think it’s amazing that she plays the way she does and how she puts her heart out there.”

Mailee Jones, a junior guard for Reagan, didn’t find out about her teammate’s ailment until Emily told her before their sophomore year.

“When she told me, I was ‘Whoa,’ ” Jones said. “I was shocked that she could have that illness and still play basketball. How she gets after it, I don’t know how I would handle it. When I get after it after a couple of possessions, my body hurts. When she told me, my respect level for her went sky high.”

All the way back

Emily earned a starting spot for Reagan as a sophomore. She was part of a sophomore class of four starters that helped the Rattlers earn their fourth straight district championship.

This year, Emily has been a key contributor for Reagan. She averages 11.8 points and has made 43.9 percent of her shots from the field. Earlier this season, she earned all-tournament honors at the Mira’s Texas Rivera Tournament in Corpus Christi.

“She’s so courageous playing through that,” Barton said. “So many kids couldn’t do it, and it’s a very tough thing to do. I commend her for the courage to overcome that and be able to play at a high level.”

While Emily is able to play basketball, she still endures quite a bit of pain. She tolerates it because she’s playing the sport she loves.

“I don’t let things come in my way,” Emily said. “If I have a goal, then I’m going to try to accomplish it, no matter what.”

Emily takes a regimen of medication and supplements to treat her illness. While she feels better, there are times when Emily is unable to endure the pain on the court. Sometimes, she’ll take herself out of games. Larry Sandoval chronicles his daughter’s games via video. Seeing these moments are tough for him.

“When I see her in pain, it hurts me, but there’s not much you can do,” Larry said. “She’s doing what she wants to do.”

Said Jones: “I can see it sometimes when she squints her eyes a little bit. Tears want to fall out, but she keeps it in. Bottom line, she’s a fighter and that’s what I want in a teammate.”