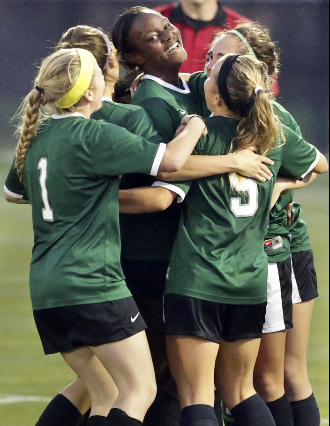 Reagan junior Tia Pearcy knew it would had been easy to get frustrated and ponder what might have been a squandered opportunity.

The Rattlers, after all, had a nice breeze at their backs in the first half and created their share of scoring threats, but they had nothing to show for it.

“We needed that goal in the first five minutes, that’s what coach (Frankie Whitlock) told us in the huddle (at halftime),” Pearcy said.

Pearcy delivered less than 90 seconds into the second half, running onto a pass from Nicole Galan and slotting a shot inside the right post to lead Reagan past Smithson Valley 1-0 in a Class 6A third-round game on Tuesday at UTSA’s Park West Complex.

The Rattlers (19-2-2) advanced to the Region IV-6A tournament Friday and Saturday in Brownsville. It is their 10th trip to the regional tournament in the past 14 seasons and the second straight.

“I just saw there was an opening, I called for it, and Nicole gave me the perfect ball,” Pearcy said. “I looked up and hit it in.”

From there, Reagan used its depth and continuous pressure to hold off Smithson Valley (17-3-4), which had a 17-game unbeaten streak snapped. The Rangers had gone 13-0-4 since back-to-back losses to Dallas Highland Park and Cedar Park in January.

“It’s really nice that we’re able to use every single person on the team, and everyone works equally hard, and everyone’s equally ready to step up,” Galan said. “I think the key is staying patient and not getting frustrating until you find a rhythm.”

In Beeville, goalkeeper Emily Moravits made three saves as the Tigers outlasted the Brahmas on penalty kicks.

Carroll (17-4-4) advanced to the Region IV-6A tournament Friday and Saturday in Brownsville.

The Tigers, who advanced to the regional quarterfinals for the first time since 2004 by outlasting New Braunfels on penalty kicks, accomplished the feat again after the teams played through a scoreless second half and overtime.

Boerne 5, Liberty Hill 1: The Greyhound scored five unanswered goals after an early deficit and advanced to the regional semifinals for the first time since 2002.