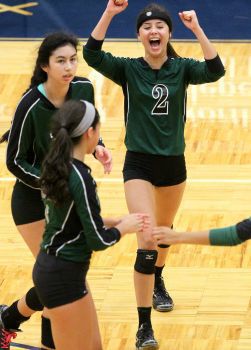 Reagan volleyball is going through some growing pains as it heads into the first season of the post-Ashlie Reasor era.

Reasor, named a high school All-American by several media outlets, is now fitting in as a member of Texas A&M volleyball team. That leaves the Rattlers trying to figure out just about everything.

“She carried 70 percent of our offense,” Reagan coach Mike Carter said. “So, we have kids who haven’t had the responsibility of having a big weight on their shoulders, and not letting the score, the crowd and those types of things get to them.”

Reagan was 39-7 and lost to Churchill in the regional finals a year ago.
The Rattlers opened the season last week with a sweep over Brennan. They followed with a 3-4 showing at the Texas Volleyball Invitational in Pearland last weekend.

Beginning Thursday, the Rattlers will participate in the Fraulein Volleyfest in New Braunfels.

These early-season tournaments are crucial for Reagan’s young team.

“(We want) to grow, come together and mature as a team,” Carter said. “We have some kids playing new spots and carrying a different role (than before).”

Carter is counting on the leadership of senior captains (and defensive specialists) Adrianna Knutson and Adrianna Gonzales to lead the way. They are key in starting Reagan’s attack.

Carter said junior outside hitter Faith Squire will be the first option. Freshman outside hitter Elise Barbosa is expected to factor heavily into the offense. Sophomore middle blocker Izzy De La Rosa will be strong, too.

Carter hopes to see everything come together by Sept. 12 when the Rattlers open District 26-6A play against Roosevelt.

“We’ll get prepared with the pre-district schedule that we have,” Carter said.