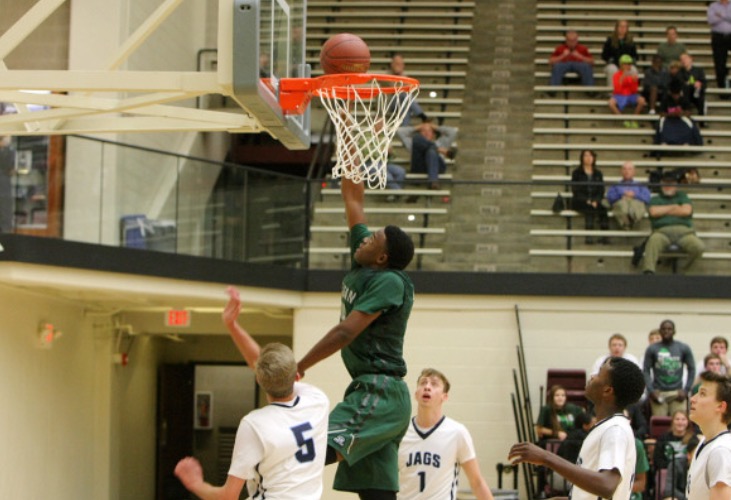 The play that had Reagan’s loud student section cheering the loudest on Tuesday night did not count.

In the closing seconds of the first half, Reagan senior forward Chuck Kendley dribbled along the baseline, came from underneath the basket and dunked just after the horn sounded.

The next time he dunked, it served as the evening’s exclamation point. Kendley gently threw the ball down with no one around him to seal Reagan’s 76-61 victory at Littleton Gym.

“I wanted it pretty bad,” Kendley said of the slam. “It’s pretty exciting to get it against Johnson.”

Reagan coach John Hirst said he expected Kendley to be one of his best players last season. But a broken leg forced the forward to miss a majority of the schedule.

Any lingering effects of the injury were invisible Tuesday night.

“We just don’t have big guys that we can take it in to and throw it inside like they do,” Keller said. “I had a sneaky suspicion they’d come out in a zone and force us to shoot some outside shots.”

Johnson’s Greg Bowie scored a team high 19 points, including 10 in the third quarter as the Jaguars tried to rally with their leading scorer on the bench.

Johnson senior guard Asa Cantwell — who finished with 13 points and is headed to Houston Baptist — was in foul trouble for much of the second half.

In the fourth quarter, he hit back-to-back 3-pointers to cut Reagan’s lead to three. But Reagan rallied and ran away at the end, with Kendley’s slam capping the win.

“He really played a good game, and there’s no question he’s a leader for us,” Hirst said of Kendley. “When he’s playing hard, it sets the tone for the rest of our guys.”