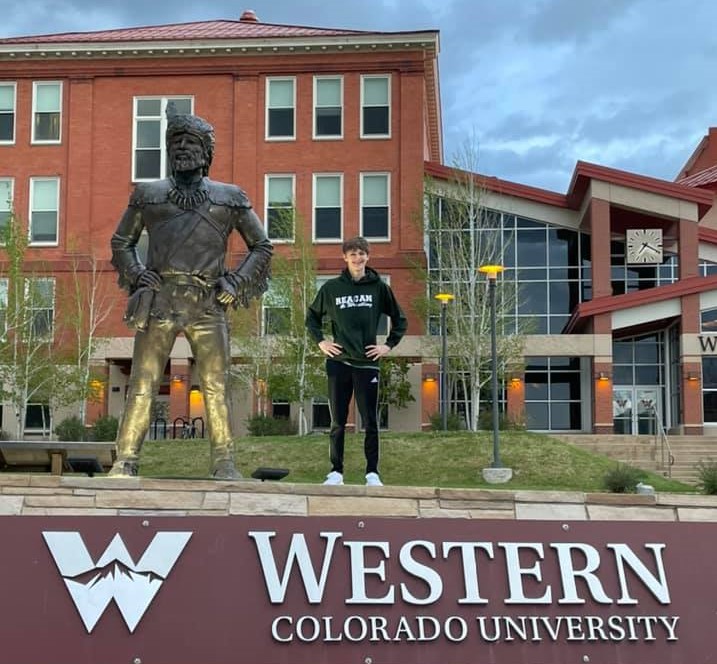 Congratulations to 2021 Graduate Zarek Hernandez for signing his letter of intent to wrestle for Western Colorado University in Gunnison, Colorado.  Zarek is a three-year letterman at Reagan, three-year State Qualifier, earning 3rd place at State in 2020.

Western Colorado Mountaineer’s Head Wrestling Coach Charlie Pipher has been with the program since 2011 – starting as an assistant and taking over the helm in 2018.  As Head Coach, he has produced 4 All-Americans, 3 Region IV Champions and 10 National Qualifiers.

Zarek selected Western Colorado based on the coaching staff and partners.  “All the coaches are NCAA placers – one of them placed 1st two times in his college career,” he said.  “my practice partner is an NCAA placer as well.”  The school’s commitment to the wrestling program was also a huge factor in Zarek’s choice:  “The whole campus is built around wrestling – it will be different from Texas where everything is built around football,” he said.  Of course the beautiful state of Colorado didn’t hurt either.  Zarek said, “I love the mountains and the scenery.  I won’t be able to snowboard until after the season, but I am looking forward to it as I am 20 minutes from the ski resorts.”

You can keep up with Zarek next year @mountaineer_wrestling.

Congratulations and best wishes to Zarek as he pursues his academic and wrestling goals! Go Mountaineers! #FearTheNeers