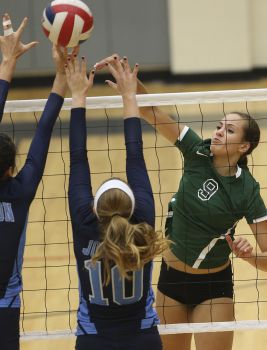 SAN ANTONIO — The big-name players who provided so much in 2013 have moved on to the Division I college ranks. And the points that appeared to come relatively easily now take a little longer to secure.

No. 7 Reagan has undergone a significant transformation in the last year, from its personnel to even its style of play.

The results, though, have remained familiar.

“We obviously miss our previous seniors — they were awesome,” said Squier, a junior outside hitter. “But we’ve also bonded as a team and accepted our new players and moved on with it. It’s a new year. We just want to make it great.”

Against Johnson (21-9, 1-1), Reagan took a step toward accomplishing that goal with balanced attacking and its resolve in crucial moments.

In the pivotal second set, the Rattlers rallied from a 21-18 deficit for a 24-22 advantage, squandered two set points when Johnson’s Gabriela Moran registered consecutive kills, then rebounded to win the frame on back-to-back kills from Barbosa.

Reagan used a 7-1 run to turn a 17-16 deficit into a 23-18 lead in the third set. The Jaguars responded with a 5-1 spurt, highlighted by two kills from Moran and an ace from Kylie Rittimann, to erase a match point and pull within 24-23. The Rattlers prevailed on a Johnson service error.

“We’re a young team this year, but we play with a lot of heart,” Reagan junior setter Tori Hinojosa said. “We fight every point. We get down sometimes, but we know we can grind it out.”

Behind tough defense, the Rattlers set the tone of the match in the opening frame. They used a 9-1 run, including five points on Johnson hitting errors, to turn an early 12-10 deficit into a 19-13 lead. The Jaguars closed to within 19-18, but two kills from Squier and a serving error helped Reagan regain control. Johnson got no closer than two points.

“We’ve changed from an offensive team to more of a defensive team, but we still have good offense,” Hinojosa said. “We have kids that are willing to work, and it’s working right now.”