October 16, 2017.  On Saturday night, the Rattler Football team defeated L.E.E. 40-0, at Reagan’s annual “Pink Out” game.  Everyone was encouraged to wear pink in support of breast cancer awareness.  To show their support for the cause, the Reagan football players wore pink wrist bands and a pink sticker on their helmets.  At halftime, the Rattler football players paid special tribute to football family members who have been affected by breast cancer. The players entered the field holding pink signs with the names of family members who are survivors, who are currently battling breast cancer, or who have passed away.  In addition, led by Coach Hamilton, the football players sold pink bracelets during the week that said, “We Fight Together” in order to raise funds to donate.  Athletic representatives from Bush and Lopez also joined the effort by selling bracelets. Just over $900 was raised from the sale of the bracelets and will be donated to the Susan G. Komen Foundation. Thanks to all who helped make this possible! 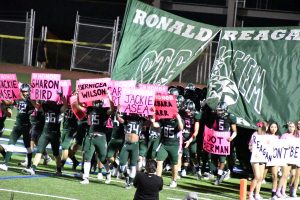