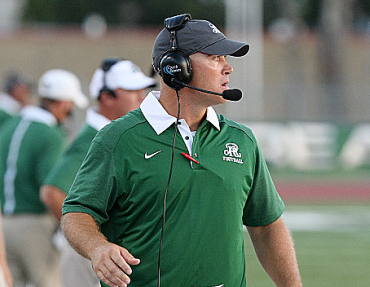 October 6, 2015 – Vote here for Reagan Football’s Coach Lyndon Hamilton!  Coach Hamilton, Reagan’s Coordinator, has been nominated for the BUILT by Nature Assistant Coach of the Week Award, presented by Dairy Max and Dave Campbell’s Texas Football. Coach Hamilton is one of 5 nominees for the weekly statewide award and the winner is 100% decided by fan voting. Go to Voteforcoach.com  and vote for our Coach Hamilton!

Coach Hamilton, Defensive Coordinator, was nominated for his leadership during the Johnson game.  It was gut check time for the Rattler defense in the 4th quarter of the game with District 26-6A foe Johnson last week, with the Jaguars’ offense nine yards from a potential go-ahead touchdown. The Reagan defenders came up with a momentous stop before a missed field goal though, and survived to remain unbeaten on the year.