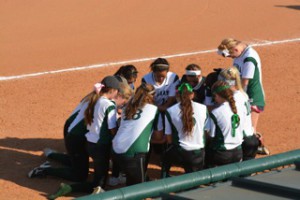 District play began for the Varsity Rattlers on Friday March 6th, against the Roosevelt Roughriders.  The Rattlers scored 9 runs in the bottom of the 6th inning to defeat the Roughriders 14-13.  The 9 run rally began with Abby Rayos’ infield single followed by Allie Voyles’ line drive to left field and Morgan Miller’s double to right field to score 2 runs.  The Rattlers continued the inning with walks from Kate Ryan, Sommer Lowry, Bari Christian, Sam Ayala and Abby Rayos.  The Rattler’s were able to capitalize on those walks with a single from Molly Damiani that scored 2 runs and a double  from Allie Voyles to left field that scored the go ahead run.  Morgan Miller concluded the hitting streak with a single to left field that scored the Rattler’s final 2 runs.  The Roughriders were starting their comeback in the final inning by scoring 2 quick runs on a passed ball and a hit.   However, the Rattler’s infield regrouped and came up solid with Sommer Lowry (P), Kate Ryan (SS) and Allie Voyles (2nd base) getting the final 3 outs of the game to secure the win.