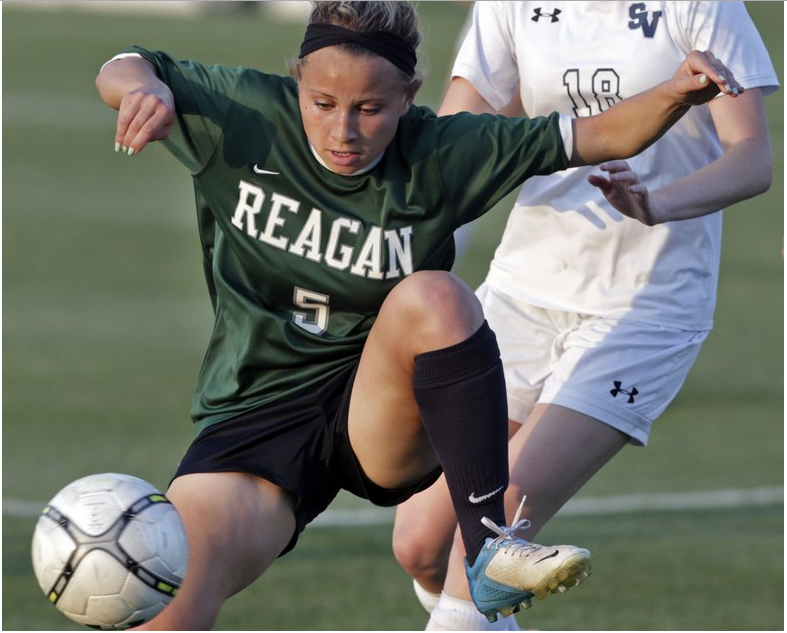 Reagan senior Sam Batley could have mentioned that she was an All-Europe first-team selection. Or that she led her high school in England to a Division III championship as a sophomore and the D-II semifinals as a junior.

Instead, Batley didn’t utter a word.

“I had to come in and prove myself,” Batley said. “It’s not about what’s on paper.”

Suffice to say, Batley has shown her worth. The forward has been an integral reason why the Rattlers (19-2-2) are at the Region IV-6A tournament for the second straight year.

Reagan plays McAllen Memorial in the regional semifinals at 3 p.m. Friday in Brownsville, only two wins from making it to the UIL state tournament for the second straight year.

“I think everybody’s really motivated. Everybody’s on the same page,” Reagan senior defender Sarah Grace Freeman said. “We can’t get too overconfident and cocky. We just have to stay humble and keep working for it if we want to get where we were last year.”

Already returning a solid core from their 2014 state-semifinalist squad, the addition of Batley, who has signed with UTSA, only enhanced the Rattlers’ prospects. She has 23 goals and 12 assists this season and has either scored or assisted on a goal in 19 of Reagan’s 23 games. Her goals are a team high, and she’s tied with Nicole Galan for the team lead in assists.

“She really just meshes perfectly with the team, and that just makes a huge difference,” Freeman said. “Adding another person onto the team can be hard, but she was really easy. As soon as she started playing, it was clear that she was going to be a good player. As she kept playing with us, she’s just gotten better and better and more comfortable, and that’s just shown a lot.”

But Batley’s adjustment wasn’t as easy as it appeared. Her family was transferred by the Air Force to San Antonio from England after her junior year, and Batley had to undergo the process of living in a new city, attending a new school, worrying about the difference in academics and athletics, and making new friends.

“I think it’s her soccer that’s helped her settle in,” Reagan coach Frankie Whitlock said. “Sam is one of the sweetest girls you will ever meet. She’s a total team player. She wants to bring her best and raise everybody around her with that.”

Batley credited her teammates with her transition. Senior Lina Fernandez moved to Reagan from Arizona before her sophomore season and understood the potential trials Batley could endure. “Fitting in was definitely a big, I guess, fear for me,” Fernandez said. “Because if you don’t fit in with the team, everything just messes up, and you don’t really play well. It took me a little bit to get into it, but once I got into it, everyone was so welcoming.”