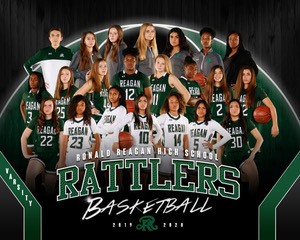 The 2019-2020 Lady Rattlers basketball team made history in the 2019-2020 season with the first unbeaten district season since opening in 1999.   The team finished second in the city in the Express News standings and made it to the third round of the UIL State playoffs for the first time since 2013-2014, beating Holmes and Steele to become Area Champions before falling to Austin Westlake in the Regional Quarterfinal.

“I couldn’t be more proud of the fight, grit, and growth of our girls this season,” said Coach Selena Winbush after the season ended.  “I was so impressed by how each game different kids would step up if anyone was having a bad night.”

“I remember being down by 15 or so at Madison, we couldn’t make shots and were not playing very well and in a timeout in the fourth quarter, our sophomore PG (Kelsie Hawkins) said ‘We are NOT losing this game!’ and put the team on her back.”

Winbush also reflected on another game that showed the chemistry of this team during the record-breaking season.

“Our bond was amazing and their trust in each other was fun to watch,” she said.  “If one person had a problem with an opponent their teammate was there to support her.”

“Nadja (Wilson) got into a scuffle in a game and got a technical so I benched her and our lone freshman Sam came to me during a foul shot in the game and said ‘Coach, Nadja didn’t do anything – please put her back in.'”

Wilson ended up being key in the win.

Post-Season awards and athletic scholarship offers continued to roll in long after the season finished for this special group.

Senior Nadja Wilson was named District 27-6A First Team, TGCA Honorable Mention Academic All-State, and has offers to play at the next level from three institutions as of press date: USAF Academy Prep School, Tyler Junior College, and Arlington Baptist.

Senior Juliett Martinez was named District 27-6A 2nd Team.  She has offers to play at St. Mary’s University here in San Antonio and Arlington Baptist.

Outside of awards strictly for their play, two seniors also received recognition for combining athletics and academics at a high level: