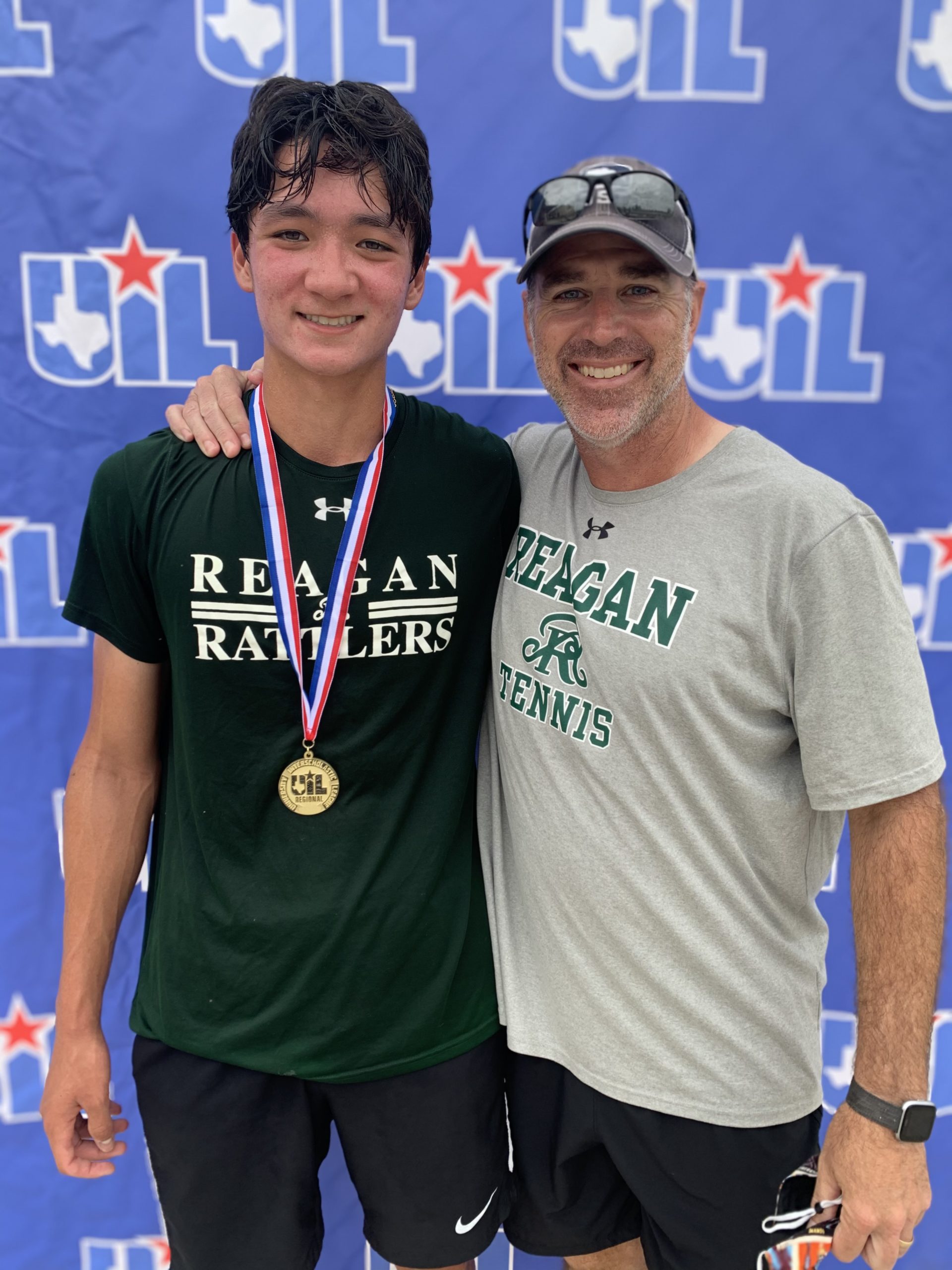 Reagan’s Kyle Totorica finished his run at State in the final four.  In the quarter-finals, Kyle started off red hot against Aiden Lee from Conroe, TX winning the 1st set 6-1.  In the first 2 games Kyle hit 5 winners crushing the ball from the baseline.  Aiden made a good change of strategy and started playing very defensive by hitting more loopy shots willing to run balls down and forcing Kyle to have longer rallies with his power game jumping out to a 3-0 lead in the 2nd set.  Kyle put his head down and closed the gap to 4-5 back on serve but was broken to lose the 2nd set 6-4.  In the 3rd and final set, both players starting experiencing cramps in their legs and arms in the 3 hour 20 minute match.  With the score at 6-5 in the 3rd, Kyle was 2 points from the match serving up 30-15 when Aiden fell down with severe cramps and took an injury timeout.  Kyle lost the game after having 2 match points to force a 3rd set tie-breaker.  There were 5 lead changes in the breaker with Kyle having 2 more match points before Aiden had his own match point at 7-6 in the breaker.  Kyle played a very patient point before ripping a forehand inside in for a winner to save match point and tie the match again at 7-7.  Kyle would proceed to win the next 2 points to take the match 9-7 in the 3rd set tie-breaker to advance to the semi-finals later that day.

After the match Kyle could hardly move from cramps and went to get an IV to replenish some of the fluids lost.  Kyle’s next opponent would be Tyler Stewart from Midland, TX who won his match 6-0, 6-0 in 50 minutes.  Kyle looked fresh starting the match up 3-1 and had 2 game points to extent his lead further but the cramps came back giving Tyler an open door for a come back.  Tyler got up 6-5 serving for the set before Kyle courageously fought hard and broke Tyler and then won the 1st set tiebreaker 7-4.  Starting the 2nd set, Kyle’s cramps began affecting his mobility so much that he couldn’t hardly run for shots and lost the 2nd and 3rd sets 6-0, 6-2.  Kyle showed everyone there what kind of a fighter he truly is.  Even playing injured, he was out playing both opponents until his legs wouldn’t allow him to move anymore.  Kyle said this is the first time this has ever happened to him so he wasn’t sure if he had a stomach bug or was simply dehydrated but Kyle’s matches drew the attention of the entire tennis center who knew something was up.  Tyler Stewart would proceed to win the finals 4-6, 6-1, 6-2 over Brendon Borland of Waco, TX.  The loss wraps up Kyle’s junior year of high school and we are all excited to see what Kyle does in 2022.