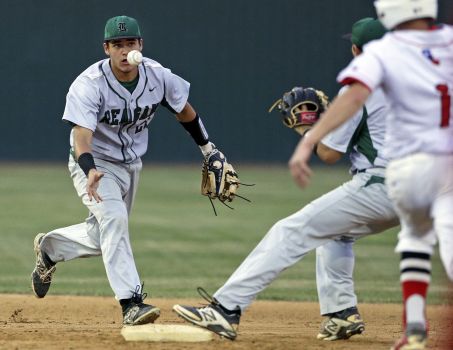 NEW BRAUNFELS — The first time Reagan put runners in scoring position with no outs, it didn’t do much with the opportunity against New Braunfels Canyon on Thursday night.

The second time it happened, the Rattlers made sure they went home with the lead in the first-round playoff series.

Back-to-back extra-base hits broke a low-scoring game open in the top of the seventh inning and helped Reagan pick up a 6-0 victory in the Region IV-6A playoffs. The state’s seventh-ranked team will have a chance to close out Canyon tonight at 7:30 at North East ISD Stadium.

Reagan coach Chans Chapman said anything can happen with a two-run lead. It can give way just as easily as it can hold. The Rattlers (26-3) didn’t have to worry about a slim margin at the end of the night.

“We did what we had to do to win the first game,” Chapman said. “That’s always important. We got the victory .We struggled a little bit at the plate.”

Junior Connor Heffron broke the game open with a two-RBI triple, and starting shortstop Ramon Garza followed with an RBI double to give the Rattlers a cushion going into the seventh inning.

Junior Andres Sosa, a Texas pledge, threw 62/3 innings and struck out 12, walked three batters and hit three more. The right-hander allowed only two hits on the evening, the last one a double by Canyon second baseman Zach Schumann down the third base line. Andrew Garza came on in relief to retire the side.

“In a type of game that it was, with us only up 2-0, we had to have that kind of performance,” Chapman said of Sosa’s outing.

The home team threatened in the bottom of the sixth inning. The Cougars had a runner on third base and the tying run in the batter’s box. But senior Nate Wasserman watched and then stretched his hands out wide as Sosa threw a strike to the outside edge of the plate to strike out the side.

Canyon sophomore pitcher Reschen Skolaut lasted 42/3 innings in the loss, but he worked out of two bases-loaded jams to keep the Cougars in the ballgame.

Before he met with his team beside the pitching mound, Canyon coach Brian Martinez noted that the Cougars did the necessary things to stay with Reagan until the seventh. A win tonight could give them the same feeling both teams had in the sixth inning on Thursday night.

“Our goal is to get to Game 3, because anything can happen then,” Martinez said.