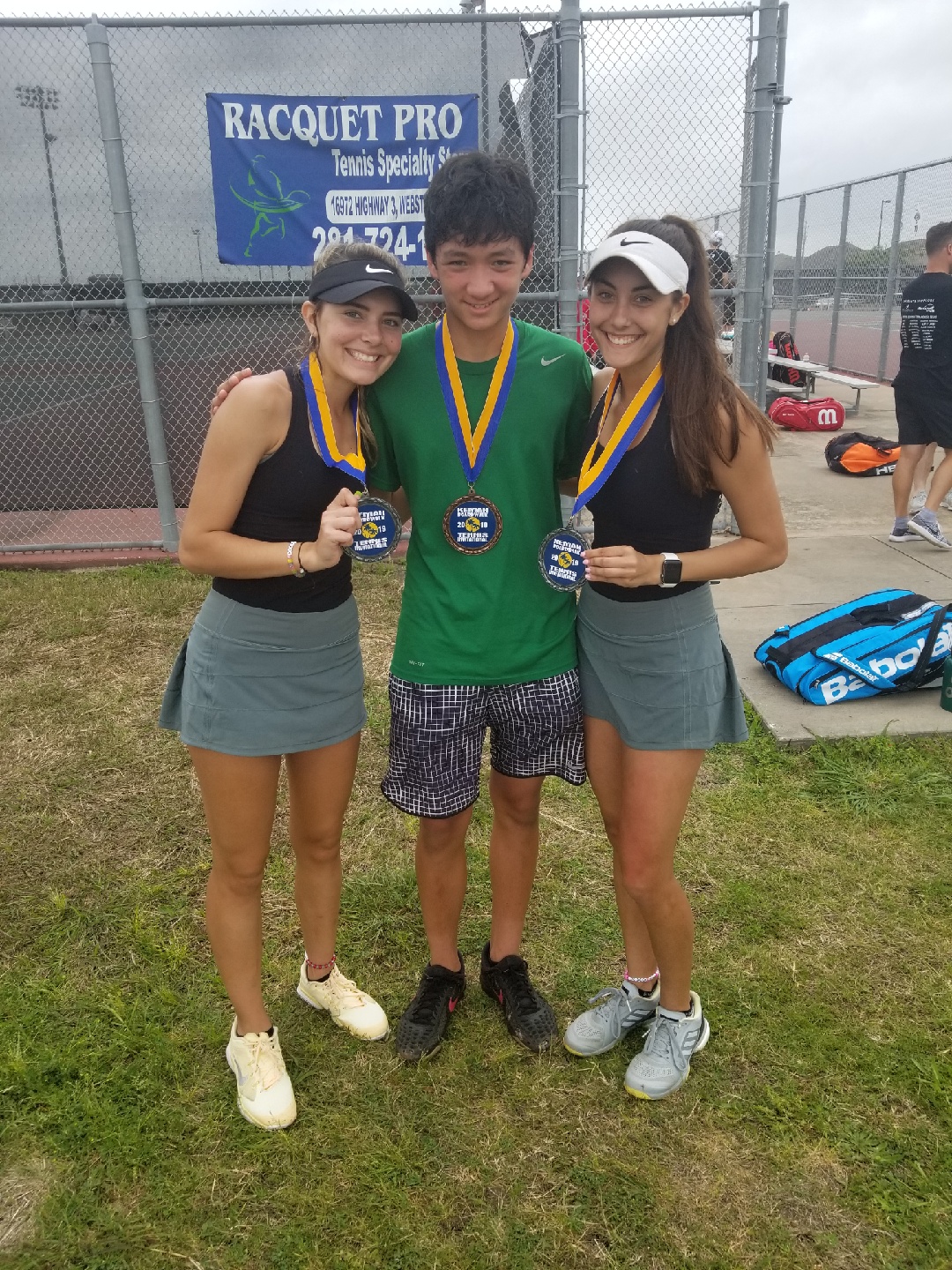 March 31, 2019 – Reagan tennis had a good showing at the Kemah Invitational which hosted some of the top players in the state.  The girls doubles team of Bailey Godwin and Kyndall Quiroz had dramatic wins to reach the finals.  After winning rounds 1 and 2 6-0, 6-0 they had to play Sifuentes/Khojie from Lake Travis high school in the quarter-finals.  After taking a 6-2 lead the pair earned a match point at 5-4 with the score at deuce.  Lake Travis won the no ad game point and eventually the 2nd set 7-6 (7-4).  In the 3rd set breaker Godwin/Quiroz found themselves down 3 match points at 6-9 before regrouping and taking the last 5 points of the match to win 11-9.  In the semi-finals the 4th seeded Reagan team had to take on top seeded Natalijia Dimitrijevic/Aleksandra Dimitrijevic who is a 5 star player and ranked 82 in the nation per tennisrecruiting.net.  The Dimitrijevics started off up 6-3, 5-4 and up 40-love.  With Aleksandra serving the Reagan duo used solid returns and great volleys to save 4 match points and took the game and eventually the 2nd set tie-breaker (7-0).  In the 3rd set breaker Bailey and Kyndall defeated the top seeds 10-6 to take the match when Kyndall drove a return cross court and Bailey poached and crushed a volley to send them to the finals.  In the finals Reagan lost 6-1, 6-3 to 2nd seeded Gabi Cusano/A. Apte from Vandergrift high school who are both ranked top 10 in Texas.  Cusano recently signed to play for Texas next year.

Reagan boys singles player, Kyle Totorica, took 3rd place.  As a freshman and top player for Reagan, Kyle might be Reagan’s most improved player as well.  In the semi-finals Kyle played #2 seed Carter Crookston who is ranked #62 in the nation as a junior in high school.  Kyle split sets with Carter and was up 8-5 in the 3rd set breaker before falling 11-9 in the deciding set.  Kyle won the playoff for 3rd place and should be the top seed in the district tournament in 2 weeks.

Reagan tennis starts playoffs at the district tournament on April 4-5.  Matches will be played at Blossom Tennis Center.