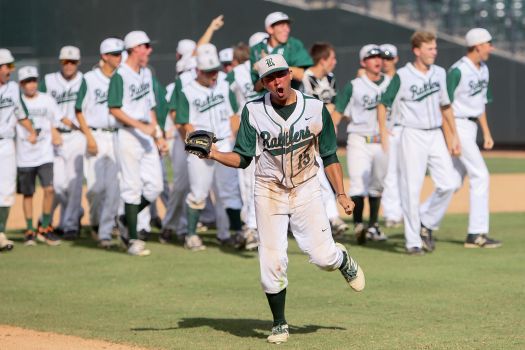 The frustrations grew exponentially with every mistake, but each time, Reagan had an answer.

The Rattlers put the final touch on a sloppy game with senior center fielder Bryan Warhurst’s RBI double down the left-field line in the bottom of the sixth, which provided the difference in their 5-4 victory over Humble Atascocita in the Class 5A state semifinals Friday at Dell Diamond.

Reagan is seeking to become the first San Antonio team to win a 5A state championship. San Antonio hasn’t won a state baseball championship in UIL’s highest classification since Highlands did it in 4A in 1968.

Reagan had four errors and Atascocita three. Only four of the nine combined runs were earned. Friday’s game was about overcoming adversity, and Reagan did the best job of doing that.

“It doesn’t have to be pretty,” Reagan coach Chans Chapman said. “You just have to find a way to win. Over the last three weeks, that is what we’ve done. We have battled and battled and fought, and we found a way to win today. It’s a tribute to the kids and their heart and their desire.”

Reagan starter Troy Montemayor celebrated his 18th birthday with a complete-game victory. He allowed one earned run on seven hits with four strikeouts. Montemayor also committed a throwing error and allowed a runner to score via a balk. But he said he was able to stay focused when he needed.

Atascocita (31-9-1) took a 1-0 lead in the top of the first when Ryan Wadkins scored on Anthony Pagano’s single. The Eagles took a 3-0 lead in the fifth when Reagan committed two errors, and Montemayor had the balk.

Reagan responded in the bottom of the fifth with four runs. Zach Morrow had a run-scoring single, and Jack Thompson came through with a two-run single that tied the game at 3.

“I was just trying to stay confident with my at-bats and know that I could do it with my teammates behind me,” Thompson said.

After Thompson’s hit, Ben Brookover followed with a sacrifice fly to right that scored Morrow and gave the Rattlers a 4-3 lead.

Atascocita tied it at 4 in the sixth when Joshua Martinez scored on a two-base throwing error by second baseman Drew Brooks, who committed two errors in the inning.

Reagan responded when freshman Cade Bormet led the Rattlers’ sixth with a hit to left. He moved to second on Andres Sosa’s sacrifice bunt. Bormet scored on Warhurst’s double.

Brooks redeemed himself in the top of the seventh when he made last two putouts to send Reagan to the state championship game.  Original article courtesy of San Antonio Express News.