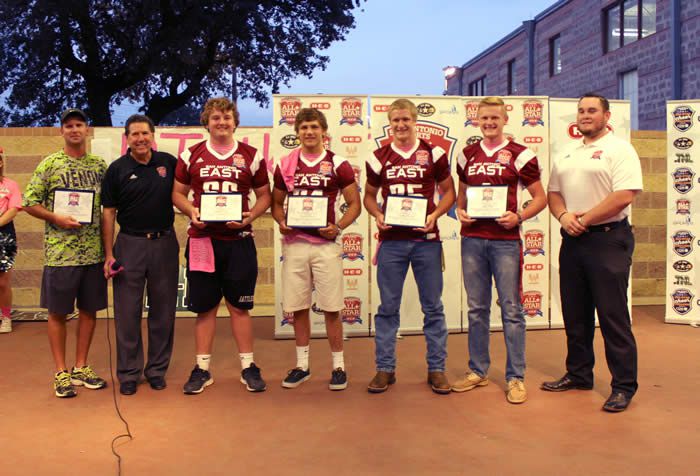 Reagan has alot to celebrate. Four of their football players have been selected to play in the San Antonio Sports All-Star Football Game. The All-Star Football Game, presented by H-E-B, will showcase top local high school players in a game following the 2015 U.S. Army All-American Bowl on Jan. 3, 2015. The classic battle of East vs. West will feature the top players in the city. Congratulations to Reagan players Alex Webb, Garrett Strauss, Brucks Saathoff and Patrick Wiley. Additionally, Reagan football coach David Wetzel has been selected to be the All-Star game’s head coach of the East. “We’re still playing our season right now. That’s what we are focusing on,” said Wetzel. “But when the season is over it’s going to be a great opportunity for these senior guys to celebrate a great season and to be honored for their success. We are very happy for them. And to coach the game….it’s a great honor.”

The celebration for Reagan doesn’t end there. Reagan was also named the Army Values Team of the Week for their win over Churchill on Oct. 17. They were presented with the banner at their pep rally on Oct. 24 in preparation for their game against MacArthur.