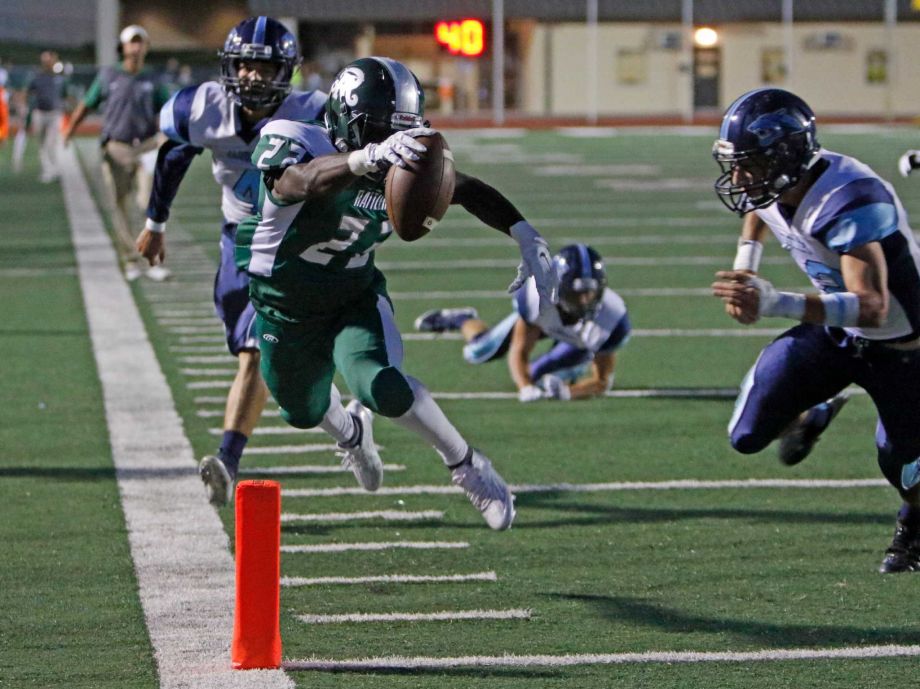 October 3, 2015 – Reagan Marquis Duncan dives into the end zone for his 2nd quarter TD. District 26-6A high school football game between Reagan and Johnson at Comalander Stadium on Saturday, October 3, 2015. The ball took a couple bounces off the turf at Comalander Stadium before Reagan junior Marquis Duncan picked up the kickoff on Saturday night. Duncan retreated a few yards and kneeled in his end zone. When the Johnson portion of the 8,003 on hand roared, Duncan knew it was a mistake. At the end of the game, the error turned out to be a footnote in Reagan’s 35-26 victory over Johnson in District 26-6A play. Duncan had a big run late that set up Reagan’s final touchdown by senior Ian Leslie with 3:42 left to seal the win. “I would have took it on myself if we had lost,” said Duncan, who was icing down a swollen hand after the game. “I’m happy we scored there. I was really happy.” Duncan finished with 16 carries for 165 yards and a touchdown, while Leslie added 89 yards and a score. At the time in the third quarter, Duncan’s self-induced safety gave Johnson five straight points.

Reagan’s defense kept the Jaguars (3-3, 1-1) from capitalizing on the extra possession. The Rattlers (6-0, 2-0) also came up with a big third-down stop after Johnson was 9 yards away from scoring a go-ahead touchdown in the fourth quarter.

Reagan coach David Wetzel said it wasn’t the cleanest game for the defending district champions, but his team did just enough to beat its biggest rival. Wetzel said Duncan wanted to make amends after the mistake and the rest of the Reagan sideline was quick to lift the running back’s spirits after the safety. The play before Leslie scored, Duncan reeled off a big 26-yard run and emphatically rejoiced as the Rattlers were on the verge of sealing a win with potential postseason implications.

Reagan junior quarterback Kellen Mond, a Baylor pledge who rushed for 106 yards and two scores, was one of those who told Duncan not to worry about the play. “We just had to pick him up because we knew he was a special player on our team,” Mond said. “We just kept giving him the ball and having him make plays.”