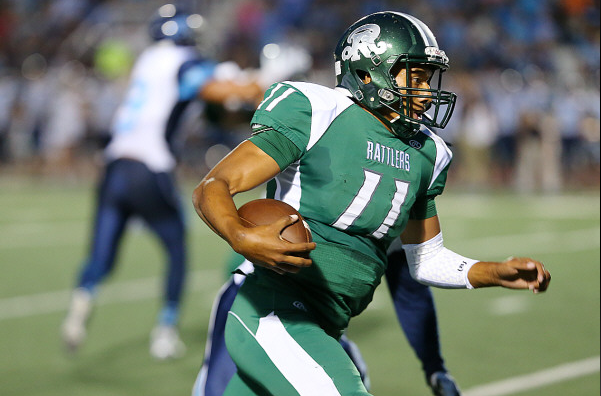 October 7, 2015 – The Rattlers were ready for the much anticipated rivalry game with the Johnson Jaguars Saturday, October 3, 2015. The stands were packed with a record 8,300 people in attendance for what is being called the “Stone Oak Super Bowl”!

This game was intense on so many levels, and never lacked of action for both teams. The fans were loud and proud and ever determined to keep up blow by blow even without a working scoreboard!

Highlights online likely tout our player accomplishments, such as our #22 Marquis Duncan who played with his usual passion and had 16 carries for 165 yards and a touchdown! # 31 Ian Leslie had an 89 yard run for a touchdown, and #11 Kellen Mond rushed for 106 yards and had two touchdowns in this game!

But this week, we thought we would share some highlights that may not make the news. For example, our #34 Pablo Herrera, with a kickoff to the Johnson 5, and a tackle right after! Our #23 Cody Martinez with an awesome touchdown right after 3 perfect blocks, never giving in or giving up! Our defensive team putting the hurt on the Jaguars and not allowing a single touchdown in the second half of the game!

Those of us that were at this game witnessed some amazing tackles by; #25 Patton Williams, #86 Brooks Roy, #40 Leighton Dimando, #24 Jake Hoggatt, and #44 Kyle Anderson’s BOOM of a tackle! #9 Cade Bormet coming in quick as QB and doing an awesome job while Kellen Mond was being evaluated after suffering a late hit. We also saw that the Trio of #3 Turner Davidson, # 77 Ryan Sullivan and #19 Bradley Ahrens are gold for us! They are 2/2 on field goals, and 30/31 on PATs!

This night showed the character of this team and what we can expect as fans watching them throughout the season! We are looking forward to another great game against the Madison Mavericks on Friday, October 9, 2015.