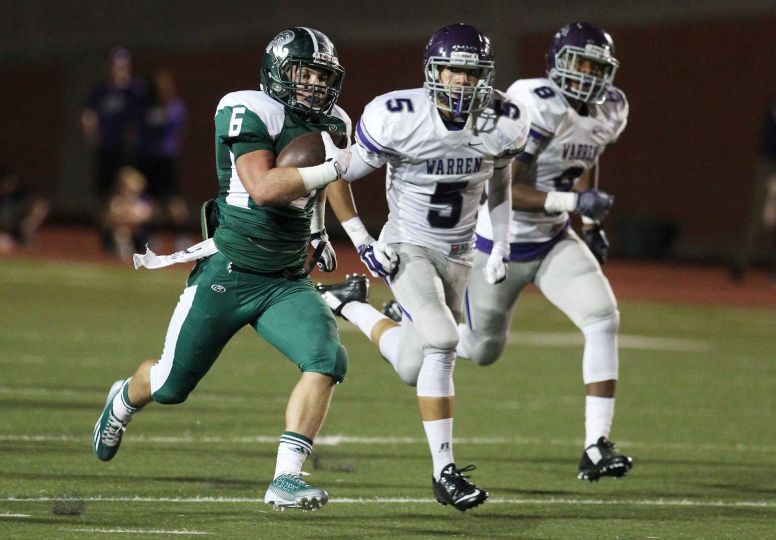 Article by Coach McDaniel: Dark ominous skies lurked around Heroes Stadium Friday night as the Reagan Rattlers (2-1) faced the cross town Warren Warriors (1-2). With the fear of rain and storms approaching the game might come down to who had the best ground attack. It turned out the Rattlers had that box checked early with an out pouring of offense from newly converted running back Skyler Wetzel (junior). Wetzel pounded the Warrior defense to the line of 167 yards on 11 carries and 3 touchdowns. The new running back also had a scored called back on a penalty. Young sophomore quarterback Kellen Mond continued to impress with his arm and legs throwing a long 36 yard pass for a score to Cade Bormet (sophomore),  while rushing for 51 yards and 2 scores on the ground. The defense was also looking to continue the momentum of the last game with 3 total interceptions all coming from sophomore standout Jake Hoggat. The defense was in line for another shutout having held teams scoreless for 7 consecutive quarters of play until Warren sprung a small leak in the rain for a last second score coming in the 4th quarter of play. The Rattler front received continued success from Brooks Roy (junior), Brucks Saathoff and Jake Killen (seniors). Garrett Strauss (senior) made his 2014 season return looking like the three year starter should with no rust and making punishing hits from the safety position.