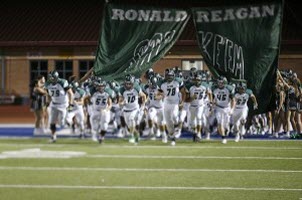 Spencer Gilliam and Travis Sthele both scored 2 touchdowns to lead Reagan to a 55-43 win over district rival Madison on Hallmark University’s Thursday Night Lights presented by Jack in the Box.

Gilliam was a huge factor for the Rattlers (7-2 overall, 4-1 in District 26-6A) on special teams, scoring on a 76-yard punt return just minutes into the game, and an 84-yard kickoff return for a score with three minutes left in the first quarter.

His second touchdown gave Reagan a 21-7 lead after the first.

Sthele scored two touchdowns on the ground with rushes of 31 yard run and a from a yard out, while also throwing two touchdown passes on the night. Sthele finished with a near-perfect passing game, going 14-of-15 for 172 yards for the Rattlers.

Madison (4-5, 3-2) got back into the game behind junior running back Dante Heaggans, who rushed for 151 yards and four second-half touchdowns.

Reagan plays Roosevelt, while Madison takes on Johnson next week in the season finales for both teams.