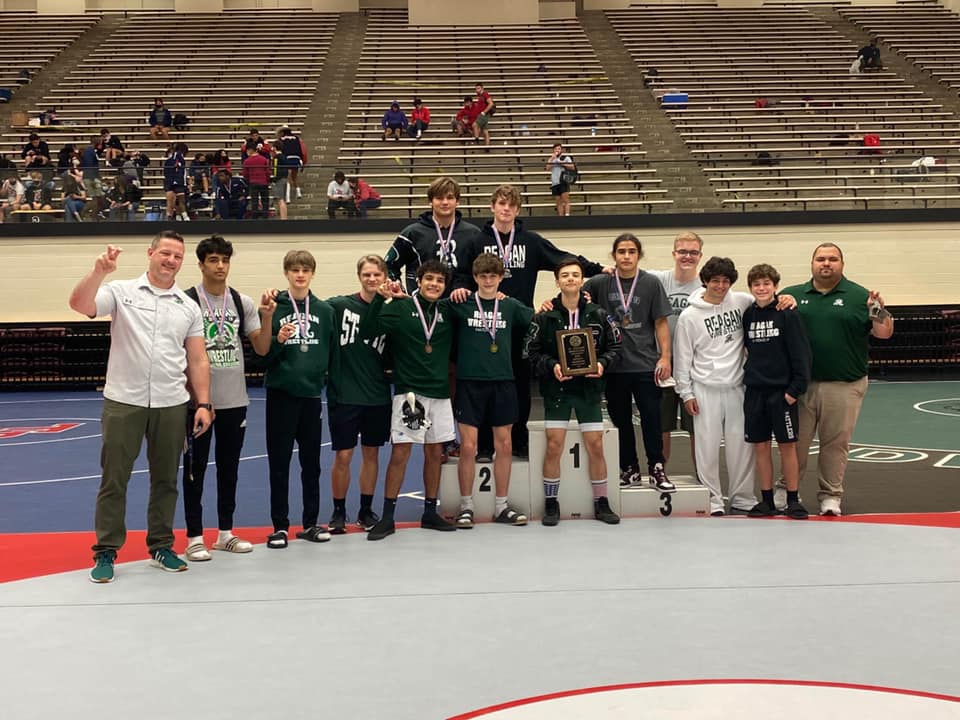 Wrestling is a sport in which athletes battle individually to score points for the greater good of the Team.  This past weekend your Rattler Boys’ Varsity Wrestling Team proved this true as every point earned counted in their 139 point Co-District Championship tie with Johnson.  Reagan is sending eight athletes to the Region 4-6A Tournament next weekend.

Sophomore Jimmy Benne scored 20 Rattler points by pinning his first opponent and winning the Finals match 12-5, earning the DISTRICT CHAMPION TITLE at 132# as well as a spot in next weekend’s Regional Tournament.

Senior Zarek Hernandez showed a different level of grit at his last District Tournament.  In his 113# Semi-Final match Hernandez wrestled through a broken collarbone to win with a 6-3 decision.  Competing one-armed, Hernandez was still able to get two takedowns and intelligently manage match time to secure the victory and 14 Team Points.  Hernandez was forced to Medically Forfeit the Finals match and he earned SECOND PLACE.  This High School season ending injury is heartbreaking and Hernandez will be missed at the Regional and State Tournaments.  Although his High School career is over, Hernandez is hoping to recover in time for the July USA Wrestling Junior Nationals in Fargo, ND and has his eyes on wrestling in college.

Senior Amir Musalli went 2-1 for the tournament, winning first by pin then by an exciting 15-14 decision.  He unfortunately dropped the Finals match, earning SECOND PLACE, a spot at the Regional Tournament at 145#, and 16 points for Reagan.

Junior Alex Sierra went 2-1 for the tournament, pinning his way to the 126# Finals Match.  Sierra earned 18 team points, SECOND PLACE and a spot at the Regional Tournament.

Junior Blake Jensen pinned his first 2 opponents, but dropped his Finals match at 182#.  Jensen earned SECOND PLACE, 18 team points, and a spot at the Regional Tournament.

Sophomore Sawyer Peevy pinned his way to the Finals match where he lost by a close 2-5 decision.  Peevy earned 18 team points, SECOND PLACE and a spot at the Regional Tournament at 220#.

Junior Brandon Jiminez pinned his first opponent, dropped his next match, then battled back to win his third match by 12-3 major decision.  In the nail-biting third place match Jimenez got an escape in the second period and was able to hold on to win by 1-0 decision, taking THIRD PLACE and a spot at the Regional Tournament at 138#.

Sophomore Nathan Almaguer went 3-1 at the tournament at 152# with 3 pins.  Almaguer earned THIRD PLACE, 16 Rattler points, and a spot at the Regional Tournament.

Freshman Connor O’Brien stepped up to fill the vacant 120# weight class spot after he was disallowed to wrestle at his 106# weight class due to UIL technicality.  While O’Brien was 14# light for this weight class, he showed heart and battled hard earning valuable mat time experience, SIXTH PLACE and 3 Rattler points.

The Boys’ Regional Tournament is at Blossom Athletic Center’s Jimmy Littleton Gym on Friday April 16 at 8:30am with the Semi-Finals and Finals being held Saturday April 17 at 8:30am.