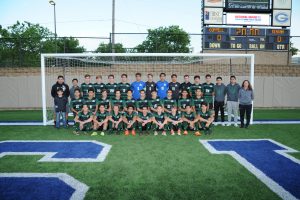 What an amazing year for the Reagan boys soccer program!  Reagan defied the naysayers the entire year by repeatingly beating higher ranked teams on their way to the state final where they came up just short in a 1-0 defeat to national #1 ranked Alief Elsik.  Although Reagan had numerous opportunities to tie the game they just could not find that one goal they needed most.  The defeat left them ranked number 2 in Texas and number 4 in the national winter rankings.

Although Reagan had many individual accomplishments this year the magic of this team was in their common desire to succeed as a collective unit.  Their team spirit and will to fight no matter how tough the opponent strengthend as the season went on.  Throughout the playoffs a different key player stepped up to make sure the team moved onto the next round.  Whether it was a last minute goal, a diving save, a key defensive play or a clutch converted penalty kick the team always found a way to win.   This team was truly greater than the sum of its parts.

The team, parents, coaching staff and administration should be extremely proud of this team’s accomplishments.  What a truly magnificent journey it has been.