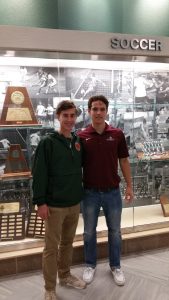 Congratulations to Jacob Galan and Carter Lovell for committing to Trinity University and the University of Texas Dallas respectively on national signing day.  Both of these student athletes will represent Ronald Reagan High School well as they move on to the next chapter in their lives.  A little about each player: 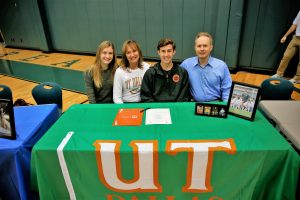 Carter Lovell – Carter grew up liking all sports but fell in love with soccer starting at the age of 4 playing in the YMCA. At age 7 Carter moved to the Richmond Strikers soccer club in VA and at age 8 began playing in their travel program. Carter actually played goalie until he was 11 when he started playing offense. Since then he has played many positions on the field but prefers midfield or wing where he plays for Reagan. Carter started on the Reagan JV team as a Freshman, moved up to Varsity his sophomore year and is currently one of the co-captains on the Varsity team. He has played for Classics Elite SC since 8th grade, when he moved to TX. He is excited to play for the University of Texas Dallas where he will continue his education with hopes of becoming a physical therapist. A profession that will allow him to stay connected to the sports world that he loves so much. Go Comets! 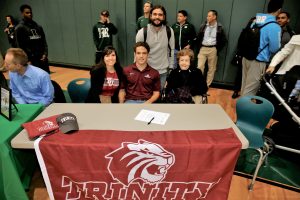 Jacob Galan – Jacob started playing soccer at the age of 5. As a select player he has played with the Classics-Elite Soccer Academy DI teams, the SA Scorpions Development Academy team and the current Classic-Elite ENPL team.  Jacob has started in each of his three years on the Reagan Varsity team (Jacob played in the US Development Academy his freshman year which does not permit participation in high school soccer). Jacob’s primary position has been right back where his speed and strength have enabled him to excel beyond his years.  He is a formidable defender that opposing forwards do not like to play against.  This year Jacob has been playing center back for Reagan where he continues to excel.  In addition to starting all three years at Reagan he has received Most Valuable Player, 1st Team All-District, 1st Team All-State, Express News All-Area Super Team, and All-District Athletic Academic Team honors for the 2017 season. In 2016 he was recognized as 2nd Team All District.  Jacob has been a co-captain on the 2017 and 2018 teams. Jacob has excelled academically expecting to graduate in the top 10% of his class.  He has received the Trinity Trustees’ Academic Scholarship and intends to major in Biology that he will use to pursue a career in Medicine.  Go Tigers!

The Reagan family wishes the best for both of these fine young men.  We look forward to seeing them achieve great things as they progress through college and beyond!