COLLEGE STATION, TX- The Boys golf team traveled to East Texas this weekend to compete in the AggieLand Match Play Invitational. The tournament was played on the Campus Course of Texas A&M and consisted of two rounds of stroke play on day one, then seeding based on those rounds, and match play on the second day. The Rattlers finished the first day as the 8th seed. They struggled in round one but played far better in round two. In match play, Reagan played the Highland Park Gold team, the seventh seed. The Rattlers won the match 3-2 and finished the tournament in 7th place. 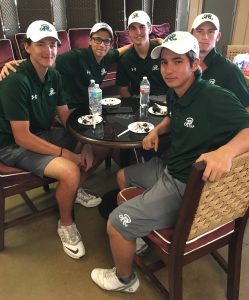