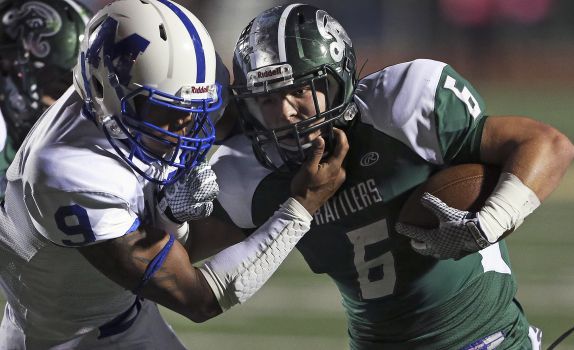 Back in the spring, Reagan junior running back Skyler Wetzel envisioned a moment like the one Friday night at Comalander Stadium.

Back then, Wetzel and his teammates were going through the paces of the team’s offseason program, trying to set a course that would define both a team and season.

Wetzel and quarterback Kellen Mond each rushed for three touchdowns as No. 5 Reagan toppled No. 9 MacArthur 45-20 to capture the District 26-6A championship.

“We always make it a goal of ours to win a district champion, so we always think it’s possible,” said Wetzel, who rushed for 94 yards and scored on runs of 2, 5 and 14 yards.

The Rattlers (8-1, 5-0) took control from the onset, putting together back-to-back 12-play scoring drives to grab a 14-0 advantage.

“Coming off an emotional win like (last week against Churchill), it’s sometimes hard to get focused and get back and go to work,” Wetzel said. “I felt like we really bonded together tonight. We executed like we knew we could, and we got the win.”

Mond jump-started the Rattlers to their 12th win in 15 meetings against MacArthur (4-4, 2-2), and their seventh in the past eight.

Wetzel also ran for two touchdowns in the first half, and place-kicker Alex Webb added a 35-yard field goal and four of six PATs as Reagan led 31-6 at halftime.