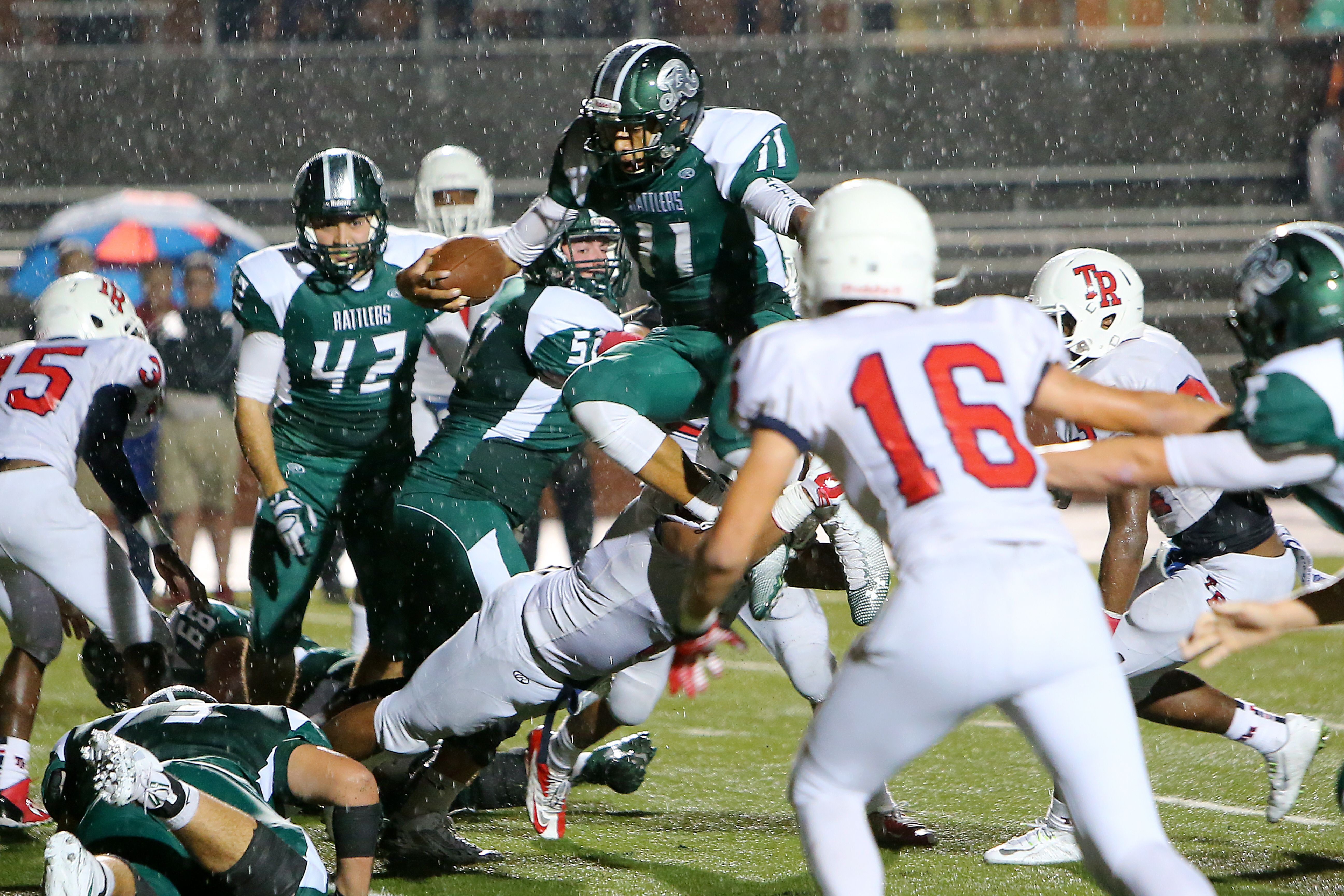 Article by Coach McDaniel: The Reagan Rattlers opened district 26-6A play Friday night at Heroes Stadium against the Roosevelt Roughriders with an impressive 47-13 victory. The night was shrouded with rain and gloomy weather and the game seemed to take on that temperament with a sluggish start by the Rattler Offense who is averaging over 40 points a game.  After trading series sophomore Kellen Mond connected with the Rattler’s leading receiver Luke Mitchum (senior) on a 40 score and later on a 22 yard dart to get the wheels rolling for the offense.  Mitchum ended the night with 5 catches for 105 yards and 2 scores. Mond on the next series made a magic like move to escape defenders finding junior Skyler Wetzel in the endzone who took a punishing blow with an exuberance that left an energetic roar in the Rattler Student section. Wetzel also pounded out 96 yards on the ground with the tandem of Ian Leslie (junior) who added a tough 8 carries for 82 yards and a score. Overall the Rattlers ground game garnered 4 rushing scores on the night with Damian Peterson (junior) and Marquis Duncan (soph.) also contributing.

The defense once again looked menacing with another impressive performance that leads District 26-6A in several catagories. The incredible accomplishment for this group is that everyone from starters to reserves contributes every game. Seniors Brucks Saathoff and Jacob Kileen continue to lead this squad of bell ringers. Hard tackles and gruesome finishes have become this unit’s trademark to the District and doesn’t show signs of regressing  because of the leadership and coaching it receives.Coach Wetzel has been a constant advocate of the defense first mentality in the preseason and now has been reaping a harvest of plays and series that have led the team to many lopsided victories in this young season.

The Rattlers look to keep the momentum going as they face their 281 rival Johnson Jaguars in a Saturday game at Comalander Stadium on October 4th, with kickoff set for 7pm. The Rattlers would like to thank everyone who supports us, even through a rain filled contest, and would like to ecourage everyone to come to Comalander and Green Out the stadium! Go Rattlers!