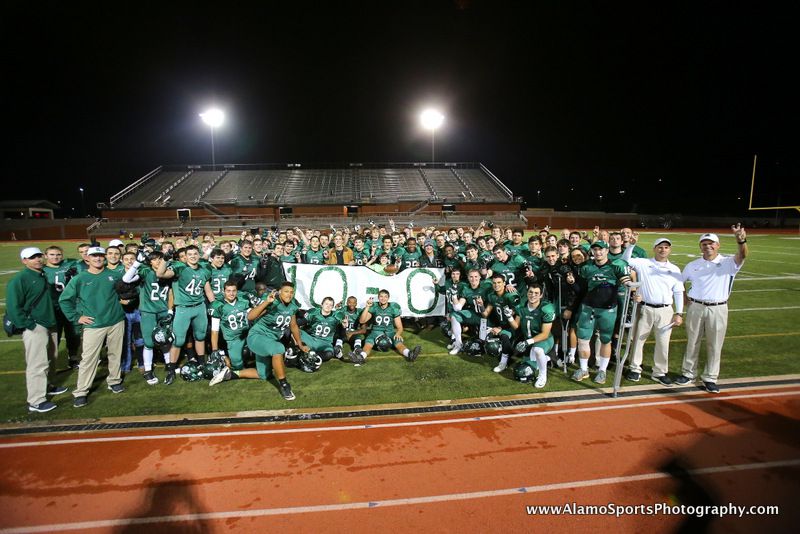 Slobberknocker would be the best way to describe Friday’s contest between the Reagan Rattlers and the Roosevelt Roughriders. The game was sluggish, hard hitting and a game you want your team to walk away from unscathed. The final score looks great on paper, 24-3, but the remnants that were left over was something that the Rattlers would have like to have finished without. Two key members of the defensive unit, Trent Walker and Jacob Killen left with injuries and may be gone or the season. These injuries would not slow down the purpose of the Rattlers though. Lifting their brothers high in and in their hearts the Rattlers finished the game and the regular season PERFECT. 10-0. This feat had not been accomplished in North East since many of these very Rattlers were even born. The defensive unit played and amazing game with many Rattlers stepping up to the challenge with Senior Luke Mitchell leading the team in tackles, with usual suspects Daerek Wilson, Efren Rodriguez and Garrett Strauss finishing a close second. Everyone on the unit contributed to a great effort that slowed the athletic and talented Roughriders. The punt team also chipped in forcing two fumbles. Back-up Junior Tyler Brenner also came in added an interception in the Roosevelt end zone to secure the great effort. Seniors Ty Summers, Kash Knutson and Luke Wilson rumbled along with their workman like contributions with a solid 24 points and 334 offensive yards. Summers finished with 63 yards rushing with two touchdowns, while also passing for 180 yards and a score. Knutson finish just shy of 1000 yards receiving for the regular season but added a touchdown to his impressive totals. Wilson pounded out 63 yards on 16 carries to add to his season totals. With a perfect season and a district title in hand the Reagan Rattlers now focus their attention on the playoffs and their first round opponent, the New Braunfels Canyon Cougars.  The Bi-District matchup is set for Friday at 7:30PM at Heroes Stadium with the Rattlers being the home team. We would like to thank you for your great support for the regular season and we look forward to you making some noise with us in the playoffs! Strike ‘em Rattlers!