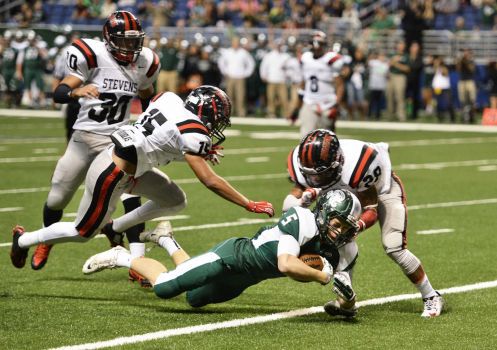 Faced with the possibility of trying to win a game in overtime without its best offensive player, Reagan came up with a goal-line stand to hang on to a 38-31 victory over Stevens in a Class 6A Division I second-round playoff Saturday at the Alamodome.

Reagan (11-1) will face Los Fresnos in the next round at 2 p.m. Saturday at Texas A&M-Kingsville.

Stevens (8-3) made a bid to send the game into overtime when it drove 78 yards to the Rattlers’ 2-yard line with less than a minute remaining. The Falcons lost yardage on two of their next three plays, and on fourth down a pass into the end zone by quarterback Bobby Chacon went incomplete.

“They made plays to get the ball downfield,” Reagan senior linebacker Brucks Saathoff said. “In the end, it came down to relentless effort by us.”

The Rattlers needed that after starting sophomore quarterback Kellen Mond was injured midway through the fourth quarter. Mond appeared to get his left cleat stuck in the turf while he was tackled. Although he was able to leave the field on his own, he was hobbling on his right leg on the sideline, unable to put weight on his left leg.

Mond passed for 212 yards and three touchdowns before he was injured.

“Kellen Mond is a special football player,” Reagan coach David Wetzel said. “He’s done great for us this year. As anybody else, we’ve got guys who can step in, and they did. We found a way to put it away.”

Reagan struck on the first possession of the game with a 10-yard scoring run by Skyler Wetzel.

That set the stage for a wild first quarter in which the teams combined for 45 points.

Stevens answered on its first play when Chacon connected with Tyrek Allen for 72 yards to tie the game.

Reagan scored 17 points in a span of 1:26 to take a 24-7 lead. Alex Webb had a 19-yard field goal, Vince Hunter returned an interception 35 yards for a score and Leyton Leone caught a 15-yard TD pass.

Stevens tied the game at 24 with a 33-yard field goal by Eric Pena at the 8:48 mark of the second quarter.

Mond completed TD passes to Ian Leslie and Wetzel for a 38-24 lead in the middle of the third quarter. Stevens cut it to a touchdown with Chacon’s scoring strike to Xavier Ortiz.

“We could never put them away,” David Wetzel said. “We had some unfortunate things happen for us today, and we couldn’t get (Stevens) to go away. They kept fighting.”