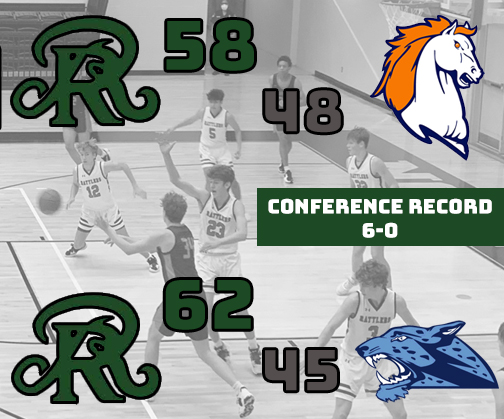 Varsity boys basketball ended 2021 on a high note, beating the Brandeis 58-48 in their first district match up.  Sophomore Aiden Richard posted an impressive 23 points in the victory over the Broncos followed by Trey Thompson with 17.

The team was back in action at Blossom Athletic Center on Tuesday night (Jan. 4) to take on rival Johnson.

After trailing the Jaguars 12-15 at the end of the first quarter, the Rattlers pulled ahead in the second quarter and never looked back. After closing the half at 32-21, Reagan came back out on the court still firing on all cylinders. They held Johnson to 10 points in the third quarter while posting 18 of their own to increase their lead to 50-31. Johnson hit a few buckets in the fourth, but the Rattlers held tight to the lead, finishing the game with a final score of 62-45.

The boys face off against Churchill in another district match up on Friday at 7:30 pm at Reagan. Join us there to cheer them on!