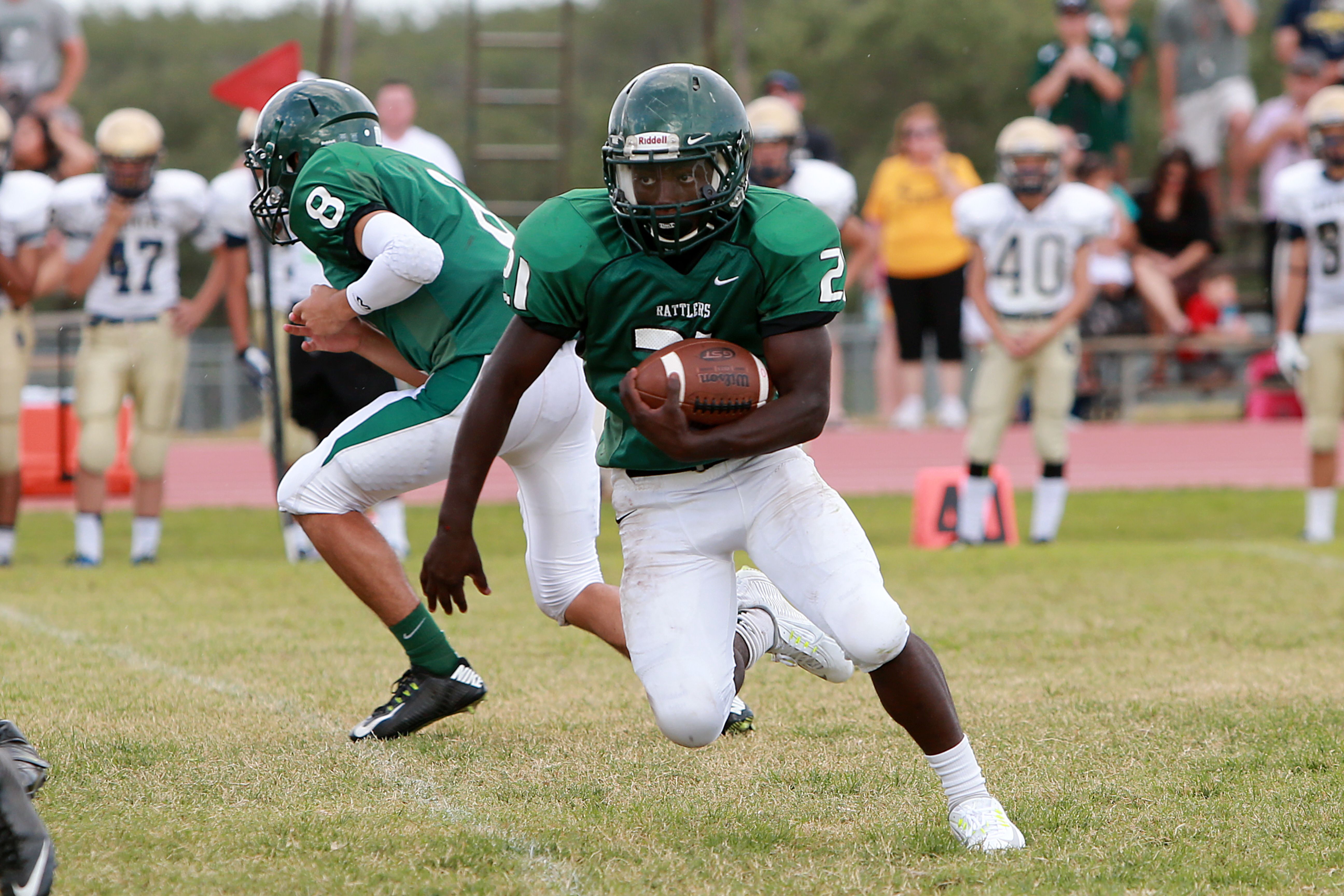 The Rattlers junior varsity football team kicked off the season in impressive fashion Friday night, dealing the visiting O’Connor Panthers JV teams back-to-back losses. The green team began the action by shutting out O’Connor 21-0. The Rattlers began the game with an impressive drive that took them deep into Panther territory and ate up much of the 1st quarter clock. The drive stalled just short of the goal line however, but the hard-hitting responded well, keeping the Panthers pinned near their own end-zone, forcing O’Connor to attempt to punt from deep in their own territory. The defense put the first points on the board during the ensuing punt when Jacob Staffier managed to get hold of the O’Connor punter and drag him down inside of the O’Connor end-zone before the Panthers could get the punt off. The huge special teams play sparked the offense, and, with Marquis Duncan carrying much of the load, the Rattlers were able to find pay dirt three times during the contest. Duncan ran for a score to open things up for the offense. The next touchdown came when the Rattlers showed that they can go deep when Luis Agaton connected with Spencer Heath over the top for a touchdown. AJ Singleton capped off the scoring with a sprint around the edge of the Panther defense and scampered into the end zone untouched. Throughout the game, the Reagan defense remained stalwart and stingy, only allowing three O’Connor first downs.
The Reagan white team picked up where the green team left off by shutting out the Panthers once again 14-0. The white team defense carried the energy from the first game over into the second game, flying all over the field and rallying well to contain the O’Connor offense. William Jordan had a stellar performance from the safety position, recording two interceptions, returning one for a touchdown late in the second half to bring the score to 14-0. The white team offense showed grit and determination, moving the ball up and down the field, but struggled to find the end-zone. The offense did show big play capability when Bradley Ahrens threw deep to Terrell Cortez for a passing touchdown. During the play the Panther’s corner got a hand in and tipped the ball, but Cortez tracked it down in the air, secured the catch and raced by the remaining O’Connor defense to put the Rattlers up early, 6-0. Fernando Agurcia bulled his way into the end-zone during the two point conversion to put the Rattlers up 8-0. The white team showed a very workmanlike mentality throughout the contest on their way to shutting out O’Connor.
The Reagan junior varsity is looking forward to start up a winning streak next Thursday at 5:00pm when Kerville Tivy will travel into the Rattler den to test their mettle against our rabid Rattlers. We look forward to your support as we show the Antlers what Reagan football is all about.