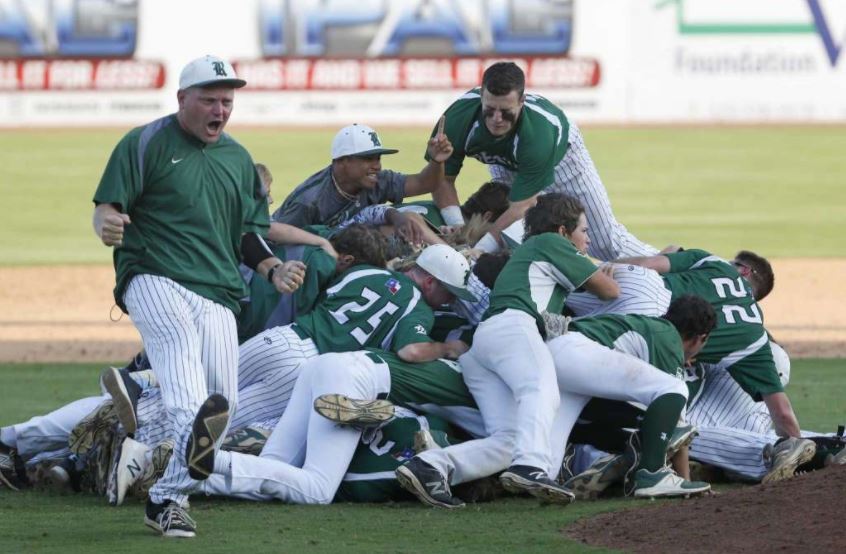 June 2, 2017 – Reagan Baseball is headed to State again! After defeating Churchill in the Regional Finals 4-0 on Thursday and 5-4 tonight, they move on to State as the Region IV-6A Champions. Stay tuned for details on the State Playoffs: CLICK HERE FOR STATE PLAYOFF BRACKETS

“Cade Bormet, Ramon Garza and Jake Hoggatt could not have asked for a much better start to their high school baseball careers, helping Reagan reach the UIL state tournament as freshmen.

Three years later, they will finish their prep careers in Round Rock. They also have a chance to finish a little better once they get there.

The Rattlers’ three senior standouts played key roles in Friday’s 5-4 win against rival Churchill, which swept their Region IV-6A final series played in front of an estimated 2,000 fans at Wolff Stadium. Reagan will play next week at Dell Diamond, where it was the Class 5A runner-up in 2014.

“We can’t wish for any more than to be there and be able to play for a state championship,” Garza said. “It would be incredible.”

The shortstop Garza drove in the eventual winning run with a squeeze bunt in the bottom of the fourth inning. The center fielder Bormet walked three times in three plate appearances and scored a run. The left-handed Hoggatt pitched a perfect seventh to earn a save a day after tossing a one-hit shutout in the series opener.

Congrats to Reagan Baseball for an amazing season so far!  We are #RattlerProud!