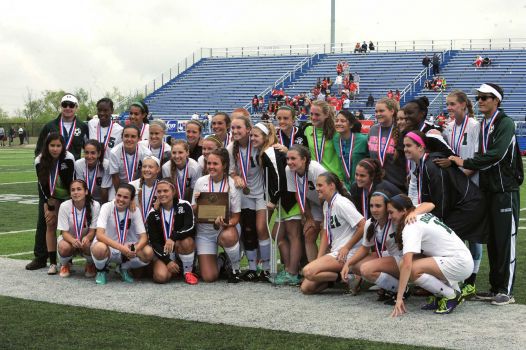 GEORGETOWN — Reagan junior defender Allison Crabbe tried to remain upbeat. She kept telling herself there was still plenty of time and opportunities left to change the outlook. But as the clock ticked down and the chances dried up, Crabbe and the rest of the Reagan girls soccer team quickly came to an unexpected conclusion — for the first time in a long time, the Rattlers would experience defeat. Two-time defending state champion Plano West blanked Reagan 3-0 in a UIL Class 5A state semifinal game Thursday at Birkelbach Field. “I think everyone’s happy with getting this far, but we just knew we could’ve beat them,” Reagan senior Nikki Popa said. “So, I think that’s what’s disappointing to us.” Leading 1-0 at halftime, Plano West (20-2-4) dashed any hopes Reagan had of tying the score with two goals only two minutes apart in the game’s waning moments. Rachel Grout scored in the 77th minute to extend the Wolves’ advantage to 2-0, and Lakyn Pope rounded out the scoring with a goal in the 77th minute. Ashley Smith assisted both goals. “You could say we didn’t drop our heads, but you could tell that some of our confidence went away,” Crabbe said of Plano West’s two late goals. “We knew that this season was gone. It just didn’t happen today.” Playing in its first state tournament in five years, Reagan (21-2-3) held its own before the Wolves struck midway through the first half. Freshman forward Abby Grace Cooper ran onto a ball deep in Reagan’s territory, got around the last defender and deposited a shot inside the right post for the game-winner. It marked the first time Reagan, which had a 12-game winning streak and 22-game unbeaten streak snapped, trailed at halftime this season. “I think the criticism that we give ourselves is ‘How well did we play?’ ” Reagan coach Frankie Whitlock said. “Did we play as good as we could? Probably not. We are going to go home and think, ‘Oh, we should’ve done this, we should’ve done that.’ The effort was there. They kind of did to us what we’ve done to teams this year — wear them out in the end.” The Rattlers did have a couple of promising scoring opportunities in the second half. Freshman forward Taylor Olson twice got behind the Plano West defense, but Wolves goalkeeper Mariel Gordon saved both of Olson’s attempts. “Every game we have to show up and play, no matter who the team is,” Crabbe said. “I feel like we didn’t play our best game. There were moments that we did shine. There were moments where we did pass the ball well.” tthomas@express-news.net