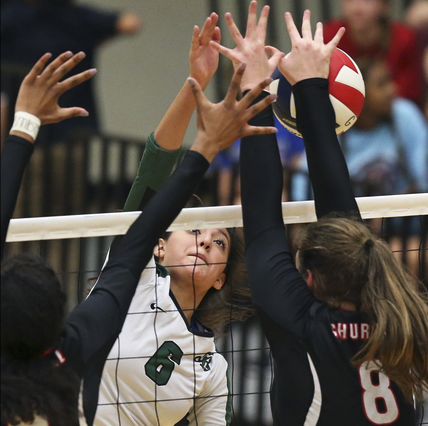 For two hours, No. 1 Reagan and No. 3 Churchill showcased why their volleyball rivalry is one of the most intense in the area.

It was the ending — Churchill senior Abby Buckingham sitting on the floor after suffering an apparent injury to her left knee on match point — that left a boisterous crowd in stunned silence.

A 6-foot-1 outside hitter who is committed to national power Texas, Buckingham left the gymnasium in a wheelchair and with an ice pack on the knee. She missed all but three sets of the 2014 season after tearing the ACL in the same knee playing in a club tournament in February of that year. Buckingham had 19 kills and 17 digs on Tuesday.

“It was very unfortunate what happened to Abby, and we hope she gets better and everything’s OK,” said Reagan senior setter Tori Hinojosa, who had 26 assists. “Overall, it was an exciting match; just a sad ending.”

Reagan (33-3, 4-0) rebounded after losing the first set by using crucial runs in each of the final three frames to win its 19th straight match. In the decisive fourth set, Churchill (28-7, 2-1) rallied from a 21-18 deficit for a 23-22 lead and appeared poised to extend the contest to a fifth set.

But Camryn Ennis sandwiched two of her team-high 18 kills around a Churchill error as Reagan scored the final three points to win.

“We were like, ‘OK, we need to get things going (after the first set),” Hinojosa said. “We know how to come back, and we work hard and believe in each other.”