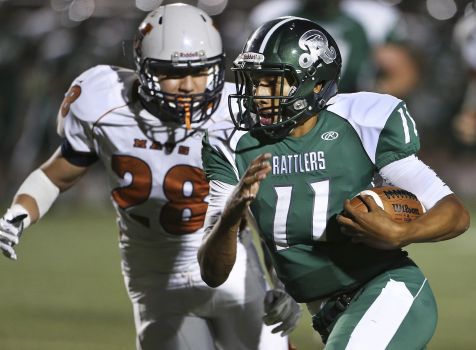 After he took the snap, Mond could either hand the ball off to his running back or run it himself. For most of the District 26-6A contest, the sophomore made the right call and made the Mavericks pay for guessing incorrectly.

Mond hurt Madison with his arms and long legs in the Rattlers’ 24-10 win at Heroes Stadium.

Reagan’s ability to run the football kept the Rattlers undefeated in district play.

“That’s who we are,” Reagan coach David Wetzel said. “That’s what we do. Madison just did a good job of taking some of it away early. We had to work for it more than we had. We had to punt more than we probably punted all year today.”

Reagan junior running back Skyler Wetzel, Mond’s other option on the designed read play, carried the ball 22 times for 90 yards and three touchdowns.

Madison senior running back Dominique Daniels helped the Mavericks (2-5, 1-2) gain a 10-7 lead in the second quarter. Daniels had 15 carries for 135 yards and a touchdown in the loss.

But Reagan capped the game with 17 unanswered points.

“I think it was just us calming down,” Mond said. “We were nervous a little in the first half, but our offense calmed down and the defense did a great job.”

And with Mond leading the way, Reagan rattled off a slew of rushing yards in the second half while its defense quieted Madison’s offense on a windy night in the northeast part of town.

“He does a great job,” said Smith regarding his quarterback. “This is what, his seventh ballgame now as a quarterback at the varsity level? He’s got experience now. I just hope he can keep getting better.”