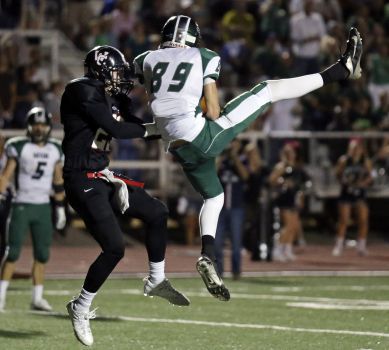 The first three quarters of Friday’s game between Churchill and Reagan foreshadowed what would happen on Reagan’s final offensive play of the night.

By the time sophomore Kellen Mond’s pass made its way toward the ground, the outcome was all but a formality.

His final catch, a 26-yard touchdown reception on fourth down with 1:17 left, gave the senior six catches for 112 yards.

“I knew I just had to go make this play and seal the game for my team so we were able to win and move on to the next game undefeated (in District 26-6A play),” Mitchum said.

Reagan (7-1, 4-0) handed the Chargers (6-1, 2-1) their first loss of the season and snapped their seven-game, regular-season winning streak dating back to last year.

Churchill’s defense contained Reagan’s offense for much of the first half. The Rattlers didn’t pick up their initial first down until their final drive of the second quarter.

That drive was capped by a 16-yard touchdown pass from Mond to Mitchum with 58 seconds left. Mitchum’s leaping grab over a Churchill defender, who was primarily looking at most of Mitchum’s 6-foot-5 frame, gave Reagan a 7-0 lead at halftime.

“They stopped our run a lot of the night,” Wetzel said.

“We popped a few runs, but not like we’ve been doing. We had to throw the football. We probably should do it more often.”

While members of Reagan’s team went over to the visiting section after the game to celebrate with their contingent of the 7,103 fans on hand Friday, Mitchum’s teammates and coaches continued to congratulate him.

Before he walked off the field and parents gathered outside the visiting locker room to talk about the game and greet their kids, the senior wide receiver confirmed what most could have guessed: