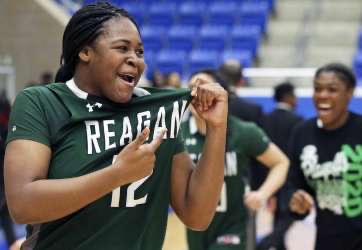 The Lady Rattlers basketball team fought its way to the third round of the 2020 UIL playoffs, beating Cibolo Steele 61-55 in the Area Championship.

The Rattlers started off with an early lead, finishing the first quarter up 12-4.  The Knights bounced back in the second, bringing the score within two for a 26-24 Reagan lead.  There were several more lead changes through the second half, but free throws down the stretch by J. Martinez (6-6) and N. Wilson (6-6) as well as two key blocks by C. Iwuala in the last two minutes sealed the game for Reagan.

The Lady Rattlers are rolling late in the season, seeking to avenge their loss earlier in the year to Austin Westlake when they face them in the Regional Quarterfinal Tuesday, February 25th at 6:00pm at New Braunfels High School.  Come support, Rattlers!!!