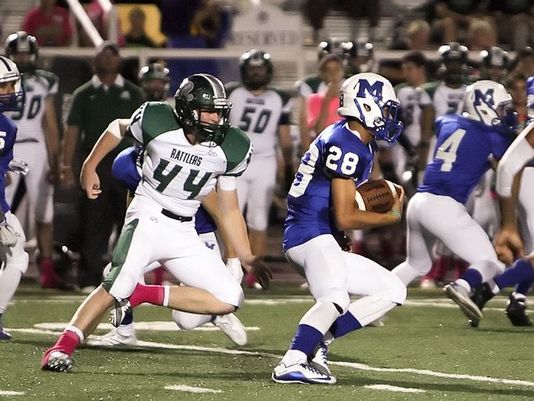 There’s a difference between having high expectations and having a misguided sense of entitlement.

At its core, the Reagan High School football program is grounded in commitment and discipline. From the moment they step into the Rattlers field house as freshmen, players learn quickly that there are no free passes to success on or off the field. Victories are earned, not given.

The same goes for district championships, as Reagan would attest. The Rattlers have won district with such regularity in 12 seasons under Coach David Wetzel that the school may have to start thinking about getting a bigger trophy case just for the football program’s hardware alone.

“There’s a culture in our program that’s a blue-collar mentality,” Wetzel said Tuesday. “We talk about that all the time. Bring your hard hat and bring your lunch pail. That’s our mentality. There’s no entitlement. You’ve got to go to work. I’m proud of that. Our kids believe that. They practice that way and play that way.”

The Rattlers have been so dominant in their district since 2013 that a victory over Lee in Saturday’s regular-season finale would give them a perfect league record for the third year in a row. Reagan has won 17 consecutive district matchups since losing to Roosevelt in the last game of the 2012 regular season.

In an era when four teams from each district advance to the playoffs and district titles have lost some of their luster, Wetzel leaves no doubt that winning a league championship still matters to the Rattlers.

“It is important to us, you betcha,” Wetzel said. “The first couple of times we went to the playoffs (in 2006 and 2007), we were not the district champions. We even went four rounds, made it to the regional final, both years. But there was still that thing that we weren’t the district champs. There’s something to be said about being the champion of your district.”

Reagan has overpowered opponents this season with an offense built around dual-threat junior quarterback Kellen Mond, who already has committed to Baylor. Mond, who also started last year, has completed 117 of 199 passes for 1,549 yards and 20 touchdowns with four interceptions. He also has averaged 6.36 yards per carry while rushing for 598 yards and another six rushing TDs.

“He’s bigger and physically better,” Wetzel said of Mond. “One thing, he doesn’t walk into the game and surprise anybody. There’s no sophomore surprise this season. Nobody is underestimating his speed or his arm, so people definitely get prepared for him. That’s a different challenge for him this season. People game-plan for him now.”

“I think the first part of the year that was a little more difficult for all of us,” Wetzel continued. “He has gotten better throughout the season. Over the last two or three games, he’s played extremely well as being the leader of the offense. His best trait is his cool, calm demeanor.”

Wetzel also had plenty of good things to say about the big guys who block for Mond as junior running back Marquis Duncan (90 carries, 980 yards, 15 TDs) and senior running back Ian Leslie (97-675-6) have both benefited from excellent line play.

“Kyle is a heck of a football player,” David Wetzel said. “He just does a lot of things real well. He can play inside run, he can rush the passer, he can cover the pass. He’s a tough kid. Skyler has played through an injury-plagued season, but he’s still playing and making plays for us. I’m proud of him. He’s the quarterback of the secondary. He lines us up back there. He’s going to make a good coach someday.”

Reagan has reached the state quarterfinals five times – all with Wetzel at the helm – but has never advanced passed that round of the playoffs.

“I know they know how difficult it is to get back to that point,” Wetzel said. “I don’t want to take anything from just getting to that point but, sure, it drives our players. We’d like to get passed that point.”

2. Reagan (9-0)
District: 26-6A
Last week: Defeated MacArthur 56-35
Ranking last week: No. 3.
The skinny: The Rattlers clinched at least a district co-championship with a win over Mac.
This week: vs. Lee, Saturday, 2 p.m., Comalander Stadium

4. Clemens (6-2)
District: 25-6A
Last week: Bye
Ranking last week: No. 4
The skinny: Junior quarterback Frank Harris hooked up with Samuel Kearns for a 10-yard TD with 31 seconds left, then ran for the two-point conversion to give the Buffaloes the one-point victory.
This week: vs. Wagner, Friday, 7:30 p.m., Rutledge Stadium

9. Lee (6-2)
District: 26-6A
Last week: Bye
Ranking last week: No. 9
The skinny: The Volunteers haven’t won seven games in a season since 1979, which was also the last time they won a district championship.
This week: vs. No. 2 Reagan, Saturday, 2 p.m., Comalander Stadium

10. Devine (7-1)
District: 14-4A, Division II
Last week: Defeated Carrizo Springs 44-0
Ranking last week: Unranked
The skinny: The Warhorses are tied with Pearsall (8-0, 2-0) for the district lead and face the Mavericks in their regular-season finale.
This week: vs.Poteet, Friday, 7:30 p.m.