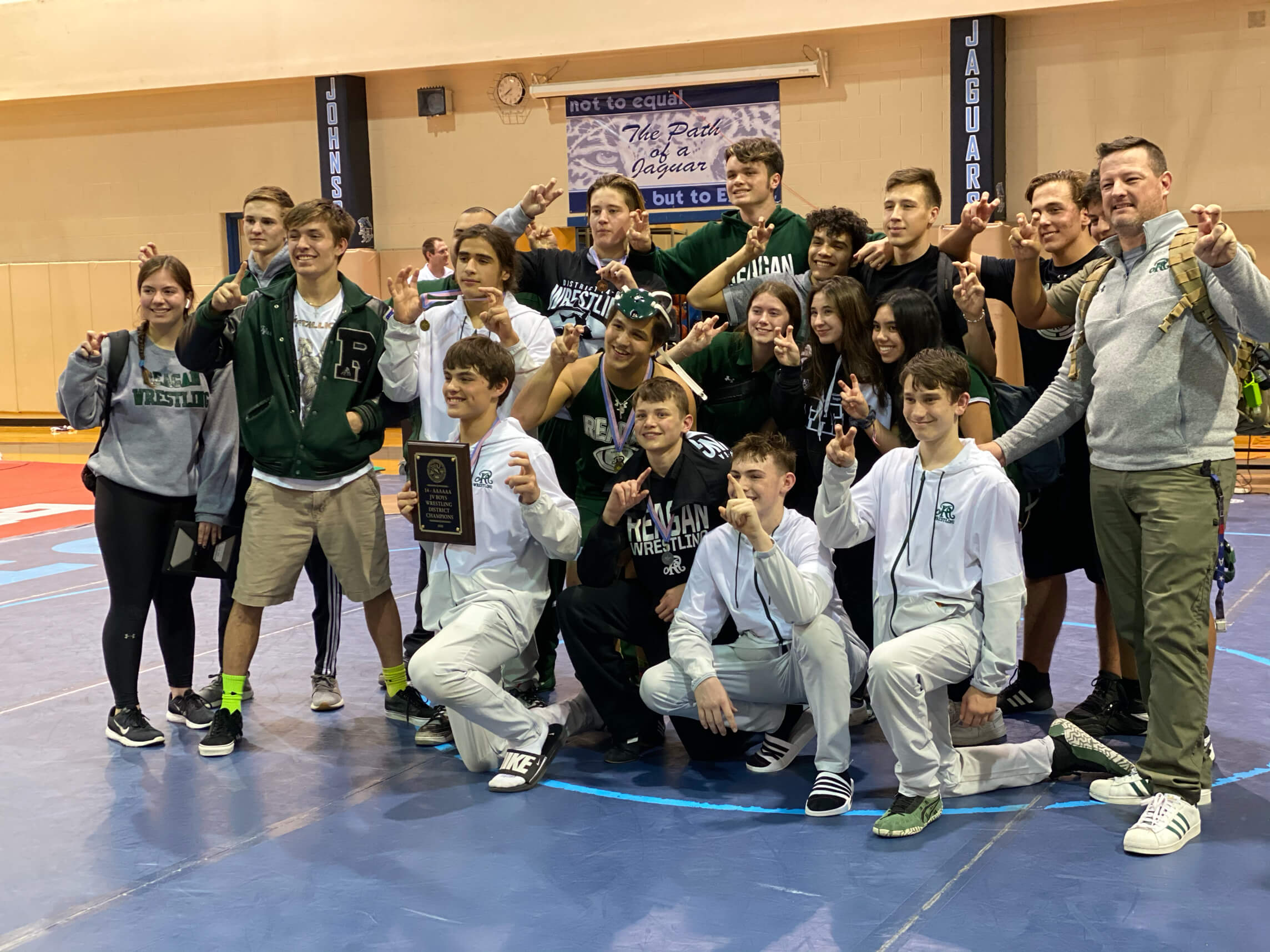 Rattler JV Wrestlers competed in the District meet last Friday January 31, and for the second year in a row came home District Champions.  Reagan accumulated 132 points, with second place Johnson being the next closest with 125 points.  The future on the mat is extremely promising for your Reagan Wrestlers!

Nathan Almaguer went 3-0 to place 1st at 152#.  Almaguer sailed through three opponents, pinning all 3 in the first period, to rack up 24 Rattler Team Points and bring home First Place.

Xavier Nava went 3-0 to place 1st at 160#.  Nava got to the Finals by winning with a pin and a major decision.  In the Finals Nava scored first with a quick takedown at 16 seconds.  The 2nd period was scoreless, and he hit a reversal early in the 3rd period for another 2 points.  Nava gave up 2 back points but was able to fight off a pin and win by a 4-2 decision to score 21 Rattler Team Points and bring home First Place.

Anthony Therriat went 2-0 to place 1st at 170#.  Therriat received a bye to put him in the Semifinals, where he controlled the 3 periods to win 8-2 scoring with 2 takedowns, 3 backpoints and an escape.  For the Finals Therriat didn’t mess around and pinned his opponent in 42 seconds to score 20 Rattler Team Points and bring home First Place.

Gage Pfeifer went 1-1 to place 2nd at 106#.  Pfeifer went down 0-5 in the first period, giving up an early takedown and 3 backpoints.  At the beginning of the 2nd period Pfeifer was back in it with a reversal and 2 back points.  Going into the 3rd period he was down 4-5, and scored 2 backpoints for the 6-5 comeback victory.  The finals he fought hard but lost to a very strong Steele wrestler.

Parker Miller went 3-1 to place 3rd at 182#.  Miller lost the Semi’s but showed grit as he worked up the back side of the bracket, winning his next match 8-2, scoring in each period with 2 takedowns and 2 backpoints.   In the 3rd place match Miller found himself down 2-8 in the 2nd period, but that changed quickly when he pinned his opponent for the 3rd place win.

Chase Trinkle went 2-2 to place 4th at 120#.  Trinkle defeated his first opponent 4-1, scoring a takedown in the 1st period and a reversal in the 3rd period, giving up only a penalty point.  Trinkle lost his Semifinal match, but was not done, and pinned his 3rd opponent in the first period.  He next match went all 3 periods and he lost a close 4-6 decision.

Jackson Balfour went 2-2 to place 4th at 145#.  Balfour pinned his first opponent just before the 2nd period ended, but lost the Semifinals by just 3 points (1-4).  He came back to win his next match by pin at the start of the 2nd period, but lost the 3rd place match 5-10.

Chase Purcelli went 2-2 to place 4th at 220#.  Purcelli pinned his first opponent, but lost the semi’s in an exciting match that went scoreless until the 3rd period when his opponent earned 2 points on a reversal.  He came back to beat his next opponent 3-1, but lost the 3rd place match 2-5.

Gabe Barbosa went 2-2 to place 4th at 285#.  In his first match Barbosa came back from a 3-4 deficit to score 2 in the 3rd period on a take down for the exciting 5-4 decision victory.  He lost his Semifinal match but came back to pin his next opponent in the 2nd period, but lost his 3rd place match.