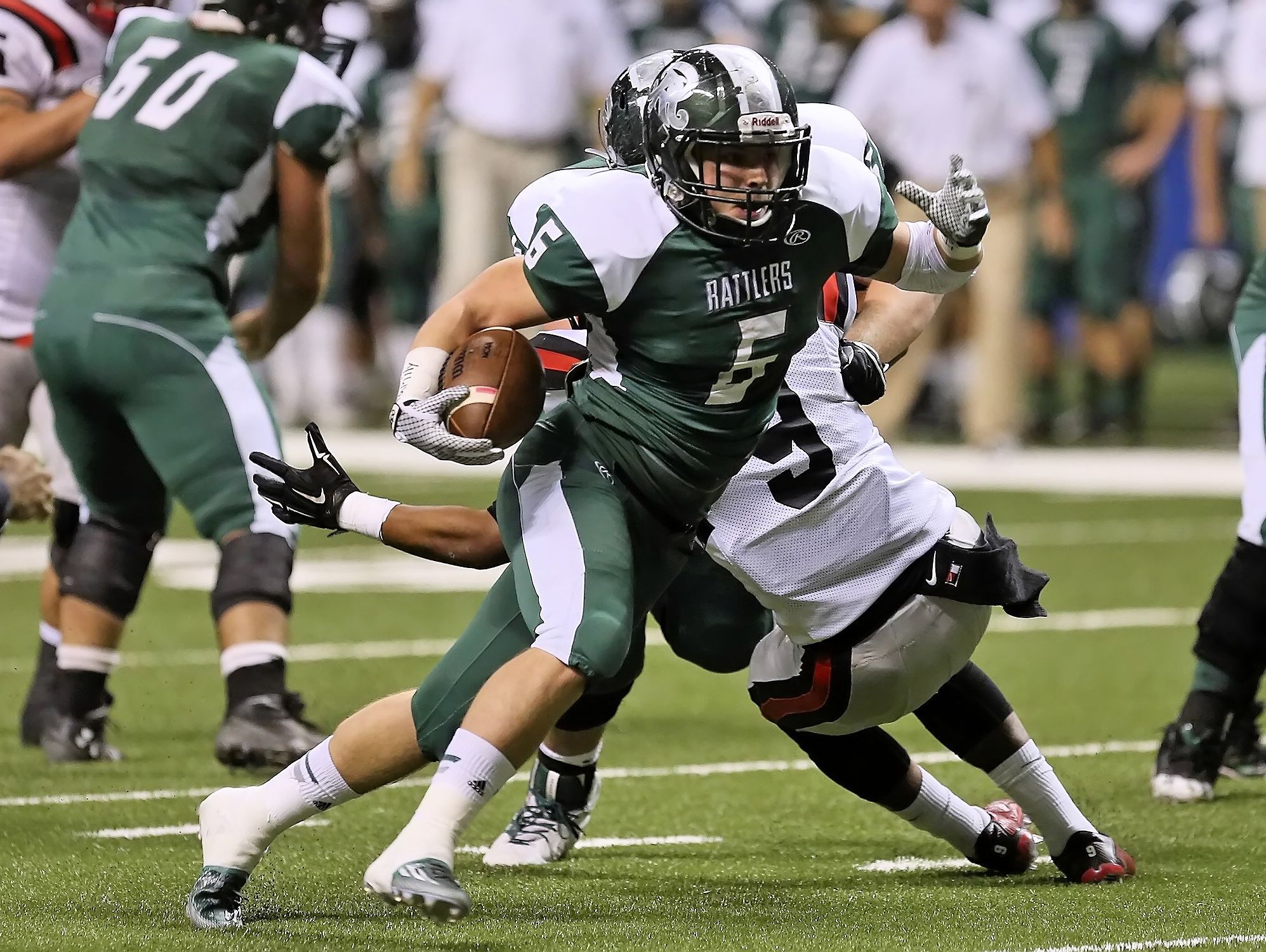 With Reagan in the midst of the high school football playoffs, father and son will be on the practice field early in the morning before going home to enjoy Thanksgiving with their family.

“Thanksgiving means a lot to every single one of us out here, especially since we’re still playing football,” Skyler said Wednesday after practice. “We got beat in the second round last year, so we were done before Thanksgiving. It’s a lot better this way. We get to enjoy getting ready for a game and then go home early to be with our families and talk football.”

Thanksgiving is synonymous with turkey and football throughout the country, but that holds especially true for Texas high school teams hitting the midway mark of the playoffs.

“You know you’ve had a good season if you get to practice on Thanksgiving,” David Wetzel said. “The day is always a little more special if you’re still playing. You’re building memories that these players and their families will remember for the rest of their lives. We as coaches, if we’re fortunate enough to coach good kids like we have been here, we’ve gotten to experience this several times.

“But some of these kids, this is their first time to do it. Some of them, it may be their only time to do, so it’s a special memory. I had a (high school) teammate of mine send me an email the other day saying congratulations, enjoy playing at Thanksgiving and don’t you remember when we used to practice at Thanksgiving?That was a long time ago, but it’s still a great memory.”

This season marks the fifth time since David Wetzel became Reagan’s head coach in 2004 that the Rattlers have extended their season to Thanksgiving weekend.

“It is fun,” Coach Wetzel said. “I’ve tried to tell our kids that even the guys that don’t have as good a fortune with winning, they still build great memories playing high school football. We happen to be in a situation where we’ve been able to be fortunate enough to win and play at Thanksgiving. We’re going to enjoy it.”

Reagan has gone 94-38 and won five district championships under Wetzel, who is in his 11th season with the Rattlers.

A former Reagan ball boy, Skyler Wetzel was in the first grade when his father became the Rattlers’ coach.

“I’ve grown up watching the Reagan football program grow,” Skyler said. “I never missed a game. It was a lot of fun. I looked up to the players. I remember Derrick Walls, Marcus Wright, LaQuince McCall and Kyle Davis. They were heroes of mine, my goodness.

Skyler Wetzel has become an integral part of the Rattlers’ offense since moving from safety to running back after the second game of the season, rushing for 736 yards and 13 touchdowns. Averaging 5.11 yards a carry, Wetzel gives Reagan a bona fide breakaway threat with his sprinter’s speed.

With starting quarterback Kellen Mond out for this week’s game with a knee injury, the Rattlers may lean on Skyler more than usual. Reagan held on for a 38-31 victory against Stevens in the second round after Mond was injured in the fourth quarter.

“Anytime you win a game like that, it gives your team confidence and brings you together. It’s a big deal for us,” Skyler said.

Sophomore Cade Bormet, who replaced Mond in the Stevens game, will start against Los Fresnos on Saturday.

“Kellen is on day-to-day rehab right now,” David Wetzel said. “We’re going to see how he progresses. He was out here today. He can throw the ball. He just kind of taking it day to day right now, but he’s sore. Very fortunately, it’s not something extremely severe.”

David Wetzel said it’s been gratifying to watch his son contribute to the team in different ways the past two seasons. Skyler was a starting cornerback last year before he was moved to safety in the offseason.

“He’s got some of the coach’s-kid mentality, which I think is always good to have,” David Wetzel said. “His teammates respect him. He’s a hard worker. He’s a weight-room kid. He’s was a track kid who did some good things on the track this past spring. He loves playing football. He loves his teammates.

“He can play probably anywhere that he’s asked to play. That’s probably one of those things that makes him so valuable to us. It’s a big help to our team that he can play at several different places. It’s the mark of a good football player.”

“They are very physical on offense,” David Wetzel said of the Falcons. “They really want to keep the football and methodically move it down the field. They can throw it, but they’re more of a power offense. They’ve got some big offensive linemen.

“They try to keep the football out of your offense’s hands and they try to shorten the game. Defensively, they play hard and they tackle well. This is one of these matchups, whether it’s McAllen, Harlingen or Los Fresnos, or whatever Valley team it is, it’s a big deal for them to line up against a team from the big city.”

“They’re very well coached and they play with a lot of heart and passion,” he said. “They’re going to bring a lot of fans to the game. They’re a good team.”

Of course they are. They’re playing on Thanksgiving weekend.