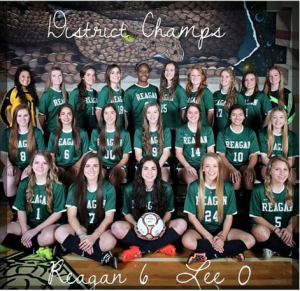 H.S. Soccer: Examining the playoff picture
Posted on March 17, 2015 | BY TERRENCE THOMAS
PRINT
0
The pursuit of high school soccer district championships and playoff berths has hit top gear and will be determined largely on the outcome of games played this week. Here’s what the playoff picture looks like heading into Tuesday’s games:

Overview: Clemens has locked up the district title, while New Braunfels Canyon and Smithson Valley will battle for second place. The Cougars are a point ahead of Smithson Valley and need a victory against Steele on Friday to secure the No. 2 playoff seed.

Who’s in: Reagan and Lee

Who’s on the cusp: MacArthur, Johnson and Churchill

Overview: Reagan and Lee play Tuesday for the district title. MacArthur (17 points), Johnson (16) and Churchill (15) – only separated by two points – will duke it out for the final two postseason spots. Johnson and Churchill square off on Tuesday, while MacArthur and Johnson face off on Friday.

Who’s in: Clark and Brandeis

Who’s on the cusp: Stevens and Jay

Hanging on: O’Connor and Brennan

Overview: Clark won the district title, and Brandeis is second. Stevens is currently third and only needs one more win to clinch a playoff berth, but it closes out the regular season with games against Brennan and O’Connor – teams that still are in the hunt for postseason spots. Jay is fourth and is playoff-bound with a win.

Overview: Southwest has locked up the district crown. East Central and Corpus Christi King are tied for second after the latter’s 1-0 win over CC Ray on Monday, but the Hornets can claim second place with a win over South San on Tuesday. A loss would likely result in a play-in or coin toss between East Central and King for the No. 2 seed.

Who’s on the cusp: Kennedy and Kerrville Tivy

Overview: Alamo Heights wins the league title with a win Tuesday over Floresville. Boerne Champion is second but has an outside shot at the league title if Alamo Heights falters. Kennedy and Kerrville Tivy are currently third and fourth, respectively, but Memorial is still firmly in the hunt. The Minutemen close the regular season with games against Kennedy and Tivy and could nab a playoff berth with two wins and some help. Seguin is mathematically alive, but would need to win out and get some help to earn a playoff berth.

Who’s in: Jefferson and Edison.

Who’s on the cusp: Lanier and Harlandale

Overview: Jefferson and Edison are headed to the playoffs and are on a course to play for the district title on Friday. Lanier would lock up a postseason spot with a win Tuesday against Sam Houston, while Harlandale, McCollum, Burbank and Highlands will likely determine the final spot.

Who’s on the cusp: Medina Valley

Overview: Cigarroa sits atop the standings, but has to likely win its final two games to grab the district title. Medina Valley needs one more win to earn a playoff bid, while Southside has the inside track to the final playoff berth but must fend off Laredo Nixon, Laredo Martin and Somerset.

Who’s in: Fredericksburg, Boerne and Wimberley

Who’s on the cusp: Bandera

Overview: Fredericksburg has locked up at least a share of the district title and can win it outright with a win or tie against Canyon Lake on Tuesday. Boerne and Wimberley are assured of second and third, respectively, while Bandera and Canyon Lake will battle for the final playoff spot.

Who’s on the cusp: Steele

Overview: Smithson Valley has clinched at least a share of the district crown and the No. 1 playoff seed and can win the league title outright with a win or tie against Judson on Friday. New Braunfels, New Braunfels Canyon and Steele each has a scenario where it could potentially finish in second place. Clemens needs a win over New Braunfels and a loss by Steele to land the final playoff berth.

Who’s in: Reagan and MacArthur

Who’s on the cusp: Johnson and Churchill

Who’s in: Clark and Brandeis

Who’s on the cusp: O’Connor

Overview: Clark and Brandeis will battle for the district title. O’Connor is currently third and can all but lock up a playoff spot with one more win. Marshall, Taft and Brennan are in a logjam for likely the district’s final playoff spot, with Marshall and Taft tied for fourth and Brennan only one point behind. Marshall and Brennan play on Wednesday in a game that will go along way toward determining a playoff spot. Taft has perhaps the toughest road to the playoffs, closing the regular season with games against first-place Clark and Brandeis.

Who’s on the cusp: Kerrville Tivy

Overview: Alamo Heights secures the district crown outright with a win Tuesday against Floresville and can guarantee itself of no worse than a share of the title with a tie. Boerne Champion and San Marcos face off on Tuesday for second place, while Kerrville Tivy can claim the final playoff spot with a victory Tuesday over Memorial. Lockhart is still alive for a playoff berth, but has to defeat San Marcos on Friday and hope Tivy loses its final two contests to do so.

Who’s in: Harlandale and Highlands

Who’s on the cusp: Edison and McCollum

Who’s hanging on: Burbank and Jefferson

Overview: Harlandale is the district champion, and Highlands is second. Edison and McCollum are tied for third and play each other on Tuesday, so the outcome of that contest will help clear up the playoff picture. Burbank and Jefferson are still alive but must win out and get some help to have any chance at the postseason.

Who’s in: Medina Valley and Uvalde

Who’s on the cusp: Southside and Laredo Martin

Overview: Medina Valley captures the district crown with a win on Tuesday against Laredo Martin. Uvalde has locked up at least second place, while Southside, Laredo Martin and Laredo Cigarroa will fight for the final two playoff spots.

Overview: Boerne has secured the district title. Fredericksburg and Wimberley will battle for second place, while Canyon Lake has clinched the final postseason bid.