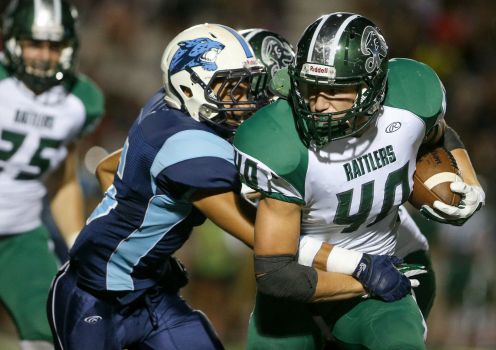 Johnson had an answer for every good thing Reagan did during the first half Saturday.

The second half was a different story, as Reagan shut down Johnson to pull away for a 33-16 victory before 8,005 fans at Comalander Stadium.

“We woke ourselves after the beginning, and we just handled our business the rest of the game,” Reagan senior linebacker Brucks Saathoff said.

Johnson (2-3, 1-1) scored on the game’s opening drive when quarterback Josh Theissen scrambled and connected with running back R.J. Espinoza for a 22-yard score.

Then, things got crazy.

Reagan answered with an 8-yard TD catch by Cade Bormet, but Johnson’s Dominik Metz returned a blocked extra point attempt for a 2-point conversion to give the Jaguars a 9-6 lead.

After Reagan went ahead, 13-6 on Skyler Wetzel’s 36-yard run, Johnson’s Devin Sizer returned the ensuing kickoff 95 yards for a score to give the Jaguars a 16-13 lead.

Reagan took control in the second half with touchdown run by Ian Leslie (14 yards) and Marquis Duncan (2 yards) on its first two possessions for a 26-16 lead.

Saathoff had two interceptions. The Rattlers turned his second into a score with quarterback Kellen Mond’s 5-yard scoring run that put Reagan ahead 33-16 on the second play of the fourth quarter.

“It all started with the defense, keeping them to one score on the offensive side,” said Mond, who rushed for 184 yards and passed for 114. “The (offensive) line did a great job of keeping their composure, and I tried to rally my offense and keep scoring.”

“We just settled things down and tried to get momentum on our side, and that’s what we did,” Saathoff said.