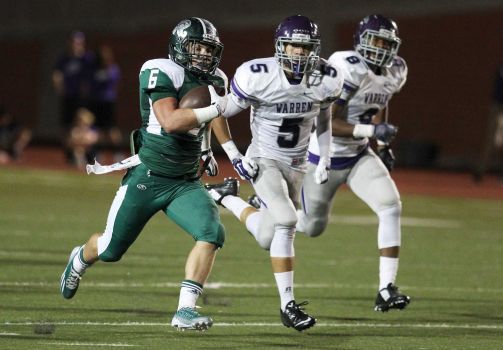 After Reagan games this season — when the women have gone to sleep — the men in the Wetzel household gather around the dining table to watch TV highlights and digest that night’s contest.

At some point around midnight, Reagan junior Skyler Wetzel will call it an evening while his grandfather and father keep talking about a game that’s been in the family for generations.

The session after Reagan’s Week 3 victory over Warren was a little different. That’s when Skyler started at running back for the first time and ran for 167 yards and three touchdowns.

The change has made this season that much more special for Skyler and his father David, Reagan’s head coach.

“It makes it special,” David Wetzel said. “With him being out here and us spending time to do something we enjoy and it being a good special run, it’s been special because these are his buddies. It’s been very special for a lot of reasons.”

Reagan faces Judson (9-4) at 7:30 p.m. Friday at Rutledge Stadium. If the Rattlers (12-1) win the Class 6A Division I state quarterfinal game, it would be the deepest playoff run in school history.

Skyler Wetzel has racked up 791 rushing yards and 13 touchdowns in his new position. He began the year at safety.

Skyler said he brought up moving to running back before the season, but his dad was hesitant to make the switch because he didn’t want it to seem like he was just moving his son into the role solely because of his bloodline.

But since the move, he’s flourished.

“He’s done real well back there,” Reagan senior offensive lineman Patrick Riley said. “He hits the hole hard and always runs really hard and is always running hard in practice. That’s what we like to see.”

The moments before the game have been special for father and son, too. Right before the Wetzels and the Rattlers run onto the field, the coach finds his running back son, hugs him and tells him to play as hard as he can.

“That means a lot to me,” Skyler Wetzel said. “Every week I look forward to that, and it gets me motivated to go out and do what I can.”