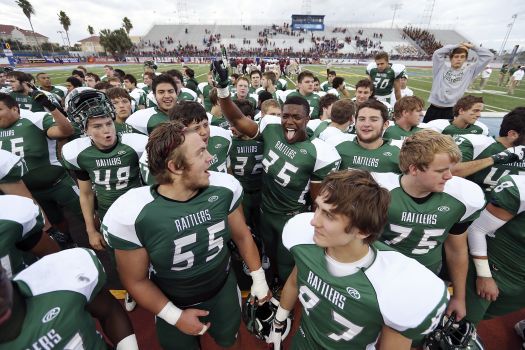 Down to its third quarterback, Reagan used a stout defense and some huge plays on special teams to post the victory at Javelina Stadium.

On Saturday, the Rattlers sat out starting sophomore quarterback Kellen Mond, who injured his left knee against Stevens the week before. Reagan went with sophomore Cade Bormet in his place. He did a good job of engineering the Rattlers first two drives for touchdowns. But Bormet appeared to injure his hand on a 16-yard run on Reagan’s second possession. That’s when things got “interesting.” He didn’t return, and the Rattlers went with junior Nick Stolt.

The Rattlers (12-1) next face Judson (9-4) in a state quarterfinal at 7:30 p.m. Friday at Rutledge Stadium. Wetzel said he expects Mond to be ready to play.

“We marched the ball down (on the first two drives) like we wanted to and then Cade Bormet got hurt,” Wetzel said. “We were very unfortunate on that, so we had to change things up a little bit. The defense rose to the occasion.”

Indeed it did. The Rattlers limited Los Fresnos to 247 total yards, including 103 rushing. Los Fresnos didn’t gain yardage on 17 plays.

The Rattlers had three interceptions and returned two for scores. Senior safety Garrett Strauss had one for 70 yards, and Jake Killeen scored on one from 25 yards. Linebacker Brucks Saathoff also had an interception, which was his fourth this season.

“We put it on ourselves to win this game,” Killeen said of the defense. “We’ve had some obstacles throughout the season, but the defense has stepped it up and done a great job. I had no doubt our defense would step up in tough situations.”

Saathoff also picked off a 2-point pass attempt by Los Fresnos’ Pierce Ruiz and returned it 93 yards for two points. Strauss set up a Rattler TD with a 34-yard punt return.