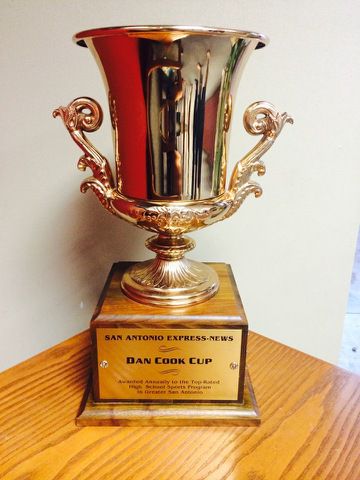 Reagan, on the strength of three regional championships and seven district titles, won the Dan Cook Cup as the top overall high school sports program in the Express-News Area for the 2013-14 school year.

It’s the third Cook Cup title for Reagan, which also claimed it in 2003-04 and 2007-08. The Rattlers compiled 154 points, winning region titles in boys swimming, girls soccer and baseball, which also finished as the state runner-up.

This is the 12th year for the Cook Cup to be awarded. Churchill won the first.

The 2013-14 overall athletes of the year are Justin Stockton of Steele (football, track) and Ashlie Reasor of Reagan (volleyball).

Story and image courtesy of mysantonio.com.