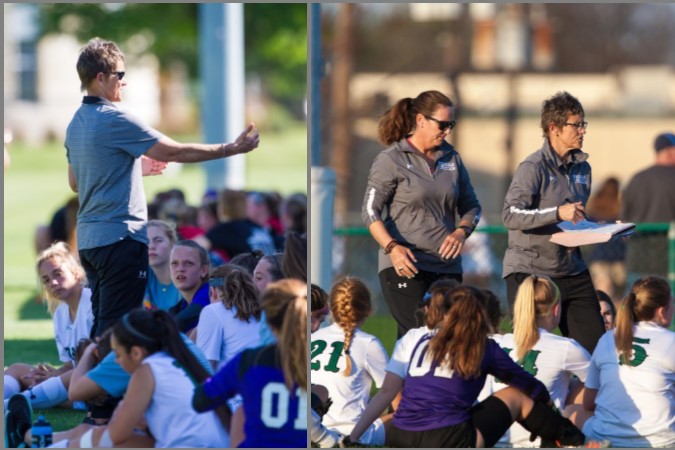 June 19, 2018 – It is with bittersweet emotion that the Reagan Girls’ Soccer Program says goodbye to Coach Whitlock after she spent 18 years building our program from scratch.   We are excited for Coach Whitlock as she will continue her journey inspiring High School athletes coaching Girls’ Soccer at The Woodlands High School north of Houston.  This move also puts her closer to her sister and her niece, which is no surprise as family has always been her priority.

During her tenure at Reagan, Coach Whitlock racked up 361 wins, which accounted for over half of her 611 career wins.  She coached the Lady Rattlers to 8 Regional Championships, and in 2017 was inducted into the TASCO Hall of Honor for the most wins of any coach in Texas Girls and Boys Soccer.

Far more impressive than her record, however, is the positive mark she has left on the young women that she has coached over the years.  Samantha Maudsley, class of 2020, thanks Coach Whitlock for “being a coach, teacher and mentor” who helped her develop as “a person, player and leader.”  Coach Whitlock’s steadfast commitment to her teams has earned her a place in their hearts, even after graduation.  Taylor Olson, class of 2017 who went on to play soccer at Oklahoma State University, said, “In my four years at Reagan there were many changes as players came and went, but the one thing that remained constant was the influence Coach Whitlock had on my teammates and me every day.  Not only did she coach us to be better soccer players, she taught us to be good people.  When I thought I couldn’t reach my goals, Coach Whitlock always encouraged and motivated me…I am so lucky to have had a coach who inspired me every day to be better than the day before.  I thank Coach Whitlock for always having confidence in me and for loving us as her own.”  Coach Whitlock’s coaching character was consistent with all players, starting freshman year and beyond.  Kate Benne, class of 2021, said, “She truly cares about making us better players on the field and better people off the field.  She reminded me how to have fun playing soccer again.  I know she will be coaching at The Woodlands now, but before she left I reminded her of what she always tells us, ‘Once a Rattler, always a Rattler'”.

Players, parents, and Reagan staff will miss her, but at the same time wish her well on her new adventure, and continue the winning Reagan tradition she developed.