Reagan’s Will Carsten signs his commitment to play baseball for McLennan Community College in Waco, Texas.

Will played Varsity Baseball and Basketball for the Rattlers in both his junior and senior year, earning numerous accolades and awards in both sports.

In Baseball, he was selected to the 2020 Rawlings/Perfect Game Preseason All-American and All Region teams. He earned also Academic All District 2019-2020; Pre-Season Underclass All American by Rawlings Sports 2019; and 2nd Team All District Pitcher 2019.  He also played select baseball for the South Texas Sliders.

During his Basketball career, he was named to the Texas Association of Basketball Coaches (TABC) All-Region team; the Express-News Super and All Area Team; Unanimous First Team All-District; THSCA Academic All-State Honorable Mention; TABC Academic All State; and Academic All District.

Carsten transferred to Reagan his Junior year from TMI Espiscopal in San Antonio where he also played both baseball and basketball. 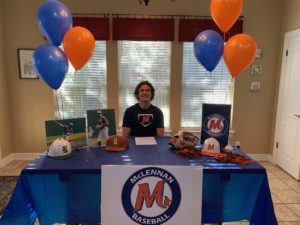