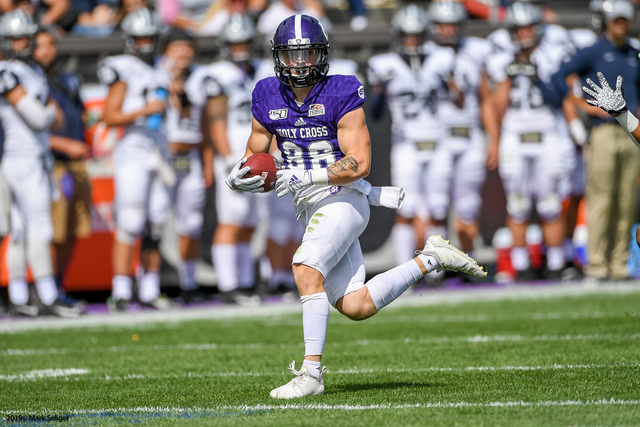 Spencer Gilliam, Reagan class of 2018, is entering his junior year as starting wide receiver for Holy Cross College in Worcester, MA. Gilliam made a huge transition from playing defense all through high school to the offensive side of the ball at wide receiver. Spencer excelled at this transition due to his athletic ability, intelligence and outstanding work ethic. His freshman year he earned numerous accolades for his special team’s performance. Last year, he started every game at wide receiver and was in the top three of his team in catches for the season. CLICK HERE for his full bio.

We caught up with Spencer to see how he is faring during the pandemic as a student-athlete and how his time at Reagan influenced his collegiate career.

Q: What was the biggest adjustment when you started at Holy Cross, a D1 program?
A: Initially it was a bit of a shock with the balance of athletics and academics because it was so intense. I adjusted quickly because my team was so welcoming and I was committed to playing football along with academics. I’m majoring in Psychology.

Q: What has been the most memorable about your college football seasons?
A: A great memory from freshman year was when we were playing Boston College. I was on special teams and blocked a punt in one series that led to a scoop and score and on another series a teammate blocked a punt and I was able to pick it up and score. A second great memory was when we played Yale. We were losing by 3 scores in the fourth quarter, but we came back to win! I was able to catch the game-tying touchdown.

Q: How are you dealing with football being cancelled in the Fall at Holy Cross and are you still working out?
A: It is difficult not playing football, but I continue to work out daily. During this time, I’ve become more introspective and have learned a lot about myself.

Q: What do you miss most about Reagan Football?
A: I miss the camaraderie with my teammates and singing the alma mater after games on the bus.

Q: What advice do you have for Rattlers who want to compete at the next level?
A: Work harder than you are right now. When you get to college there are some of the best players in the nation, either on your team or on the opposing team. Do not wait, work hard now!

While chatting about the Reagan football program Spencer indicated that he still texts with Coach Griffin and has so many good memories with him as well as Coach Hamilton. He also hopes that Reagan gets the chance to play this fall and wishes the Rattler Football team the best of luck in 2020!

Thank you, Spencer, and best of luck to you in your extremely bright future!